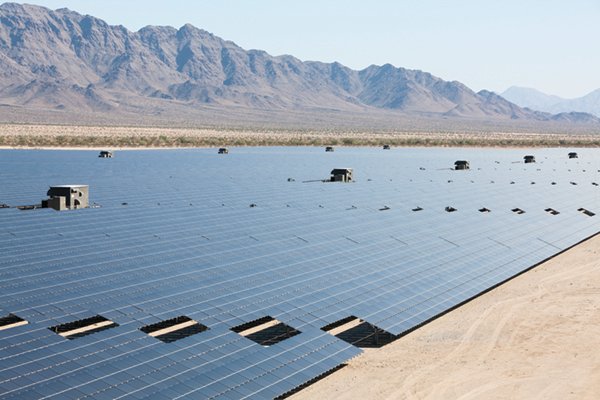 CleanTechnica sat down with Andreas Wade, Global Sustainability Director at First Solar, to talk about the what the future holds for solar module recycling.

Andreas said that recycling is something that First Solar has been working on for years. They started out by charging customers a small recycling fee with the purchase price of the module. “With every module sold, we also sold the service that we pick up the modules at end of life and recycle them,” Andreas said. “That was basically 8 years before regulation came in in Europe. We now have the electronic waste directive where PV is part of that.”

As regulations evolved, these fees were standardized and were removed from the mandated purchase price of the module and replaced with more flexible models. Andreas said that First Solar currently allows customers to choose how they want to recycle their panels via a service agreement that customers can opt-in to. This model lets customer choose another vendor to recycle their panels at the end of life if they decide not to go with First Solar.

Recycling is also a fundamental part of manufacturing solar modules. As with many manufacturing processes, scrap product is something that is generated in the process as the ends of wafers are trimmed, polished or cut, glass is cut or broken and metal frames are shaped up.

Because solar module waste is generated at the manufacturing facility, it makes sense to build recycling capability at the factory, and First Solar is doing this at its facilities in Malaysia and Vietnam. On the other side of the module, there is a looming need for end-of-life module recycling that Andreas and his team at First Solar see as an opportunity for mobile recycling units.

Shipping spent modules halfway around the world from the solar plants being decommissioned to be recycled adds no value and results in a lot of air being shipped around.”When modules return from the field, we have warranty returns from the field and end of life also,” Andreas said. To mitigate unnecessary shipping, First Solar is working on a mobile recycling unit that can be shipped to a solar farm that’s being decommissioned.

From there, a team of workers could quickly tear down the farm and recycle the panels into raw materials that could then be packaged and shipped more efficiently to the proper location for use in new panels or something else entirely. The concept of mobile solar module recycling is an innovative process that shows how First Solar isn’t just looking at its needs today, but at the needs of the industry tomorrow and a decade into the future to build a bridge to the next generation of solutions for the solar industry.

First Solar has built its recycling systems based on its own expertise in solar module manufacturing. It currently has version 3 of its recycling technology up and running at its plant in Harrisburg, Ohio. In addition to leading the development of recycling technology for First Solar, the plant is a great example of how renewables are the real job creation engine for the United States. Trump may continue to push on General Motors to keep jobs in the United States, but it is the investment in renewables, from manufacturing to sales, engineering, and installation that are the real drivers of job growth, but I digress.

First Solar also has a solar module recycling facility in Frankfurt, Germany that will be the recipient of some of the first high volume end-of-life modules in the world, following behind Germany’s early leadership in solar deployments.

Andreas said that First Solar is not waiting for the industry to develop new standards and processes for solar module recycling. “We developed the recycling technology as well. Currently we’re on version 3 here in the US, in Ohio and we’re rolling that out now to the globe.”

First Solar also sees mobile recycling as lead generation for repowering – or removing the end-of-life solar modules and installing new modules. If you can contract a single company to come in to tear out the existing solar modules and feed them into an on-site mobile recycling unit and have that same company put new solar modules in, that could be done at a much lower cost than using two different companies. As the cherry on top, it also creates new potential revenue streams for First Solar by getting low cost raw materials for new panels at the same time as it lands a new sale.

The recycling process has been refined an is essentially a closed loop system with all inputs to the recycling system coming out as a distinct raw material. “There is no waste stream or water streams generated there.” That includes emissions into the water and into the air, Andreas said. “It’s a very, very clean process. It’s basically wastewater free, the recycling. We have a closed wastewater system so it’s not generating any wastewater. From an air standpoint, it’s all completely captured.”

As the solar industry looks to the cyclical economy of the future, standards and consistent government regulations are key, especially here in the United States, Andreas said. “It gathers momentum here in the US so the industry better be able to respond and answer and be able to provide comprehensive solutions as well,” Andreas said.

Standards not only have the ability to point an industry in a common direction, they also have the ability to provide assurance that standards will exist for a long time into the future. Mandatory recycling of solar modules and solar manufacturing waste is an example of regulation that could help to keep the industry moving forward when it comes to recycling standards.

“By establishing standards early on, and that’s what we saw in Europe as well, it gives [solar module recyclers] confidence that they can invest into R&D and they can invest into developing these technologies because the streams will come. They will not come tomorrow, but they will come in 5 to 10 years and it’s their opportunity to use the little volumes that come back now to develop these technologies.”

The next building block in the bridge towards a more sustainable future for solar module manufacturing is the disposition of the raw materials that come out of the recycling process. “You have a handful of recyclers in the US that start thinking about what to do with that waste stream.”

First Solar has made significant progress to maximize internal reuse or recycling of the semiconductors and glass used in its modules. “We already have post-industrial recycled content in our modules. The stuff which we recycle is really recycled to a very high value.” The percentages are actually very impressive, as, “about 17% of the semiconductors in the new modules have already been recycled once,” Andreas said. “Also for the glass, we have recycling and recovery quotas in excess of 90%.”

The future is looking bright for the solar industry and it is exciting to see a company that’s looking at not only the challenges and opportunities of today, but to the gaps in the plans looming in front of the industry and building solutions to cross them today.