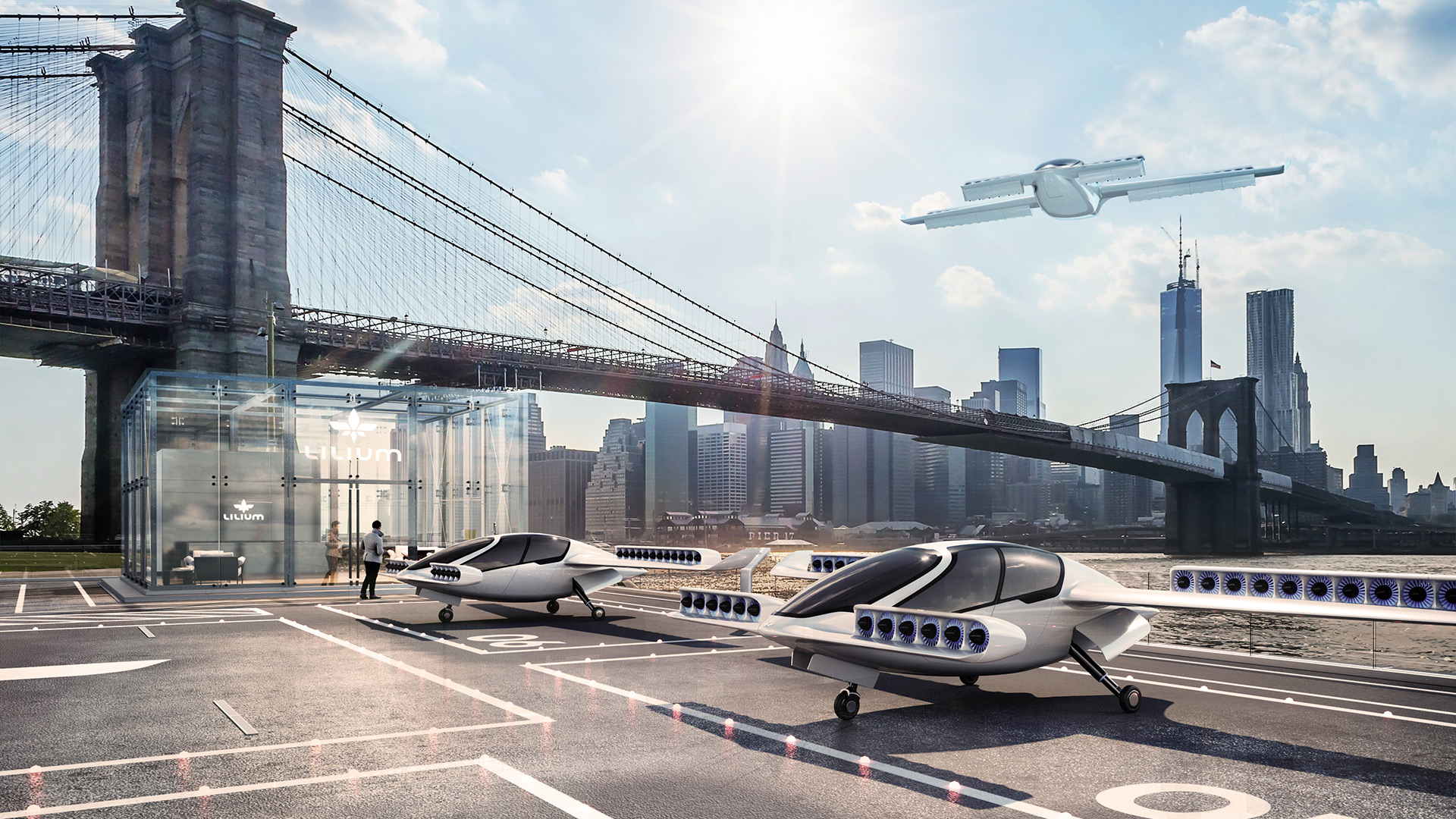 Electric Flight Will Transform Our Cities for the Better, and It Will Happen Sooner Than You Think

There’s a revolution in the air. Literally, up in the sky. Winged devices and the necessary ecosystem around them are undergoing the biggest transformation since “humanned” flight began over 100 years ago.

Technologists have promised flying cars for decades, but the aircraft industry has failed to deliver. This time is different. Instead of cars with fold-out wings, there is a new species of aircraft evolving  —  one that is small, agile, fast, all-electric and emission-free. Most of them are eVTOL (electric vertical takeoff and landing) aircraft, meaning they take off and land vertically like a helicopter and then glide horizontally on a fixed wing like an airplane.

These technical advancements are enabling a new vision for on-demand electric air taxis, allowing an entirely novel type of urban transportation modality that’s as affordable as renting a car or buying a train ticket.

In the near future, this industry could vastly change how and where we all live, work and play. There are indeed threats and challenges to this vision, but the wheels are already in motion, and the future is much closer than most people think.

Checklist for Engaging Your Utility on Renewable Power

Oil & Gas Majors in Renewable Energy: The Hunt for the Best Returns

How we got here

As with many technologies, massive military investment played a role in advancing cutting-edge aerospace technologies. Unmanned aerial vehicles (UAVs) used in the military and pioneered by companies like AeroVironment were critical in perfecting drone tech. While the initial use cases were militaristic in nature, the downstream effects catalyzed a commercial drone industry with world positive use cases  —  from helping cities more safely inspect bridges to delivering blood in Rwanda.

Over the last decade, the explosive growth of mobile computing drove a radical reduction in weight while increasing the density of lithium-ion batteries. In the beginning stages of electric flight, power wasn’t possible with lead-acid ballasts sitting in a fuselage. But the advent of energy-dense, lightweight batteries brings with it hyper-efficient, “drive-by-wire” electric rotors in flight. Without the physical constraints of heavy, fossil-fuel-driven drivetrains, rotors can be located strategically on the aircraft to maximize propulsion, minimize drag, and optimize the balance of the aircraft.

After affordable, lightweight energy storage, the second leg of the stool was sensors. Starting with accurate and enhanced GPS, the explosion of low-cost accelerometers, machine vision, and detection devices collectively allowed drones to manage themselves in ways never before possible.

Coupled with the right sensors, low-cost rotors, and lightweight composite structures, drones could finally manage themselves, or be remotely piloted. Anyone who has watched an NFL nighttime halftime show has seen extraordinary drone coordination feats which are largely driven by this type of software.

This trio of storage, sensors and software came together to build today’s $6 billion commercial drone industry. Only 10 years ago, it barely existed. Once drones are allowed to fly beyond visual line-of-sight, the market is expected to grow at an even faster pace.

Urbanization and its discontents

The democratization of flight can’t come soon enough. Cities across the country, and even more so around the world, are choking on their own growth. Dense urban environments promised us efficiency and convenience, but in many cases have delivered congestion, inefficiency, pollution and skyrocketing costs.

In order to address affordability, pollution and congestion, the transportation paradigm will have to change. As living spaces and communities become more dynamic, commuting patterns will change, and cities will need greater flexibility. Public transportation infrastructure (like subways, commuter trains and ever-widening highways) can be inflexible and expensive. While mass transit will continue to be necessary, taking to the skies will help build a more adaptive and dynamic urban environment.

There are already major forces at work here, even with much of the activity flying under the radar.

Since these big funding announcements, there have been several dozen other startups entering the urban mobility space, all with differing variations of vehicle design, flight mission and business strategy.

There are other companies adding hybrid electric tech to traditional long-distance commercial airliners, like Zunum (backed by Boeing and JetBlue) and Wright Electric (backed by EasyJet and others). Finally, there is Boom, which is working on a supersonic jet (not electric, but interesting nonetheless).

Not since the time of Orville and Wilbur Wright has there been such a wealth of innovation in the aviation industry.

Safety is paramount for all stakeholders in the air taxi industry, including regulators, service providers, aircraft manufacturers, suppliers and customers. Everyone is on the same team when it comes to safety. The world is watching, and we all need to make safety the No. 1 priority if we want this industry to develop. Likewise, one unfortunate crash could ground all aircraft and snuff out the industry before it even gets started.

To that end, the rollout should and will happen gradually.

1. Crawl: During the certification process, aircraft will go through an extensive battery of tests to ensure the pinnacle of safety and reliability. Aircraft will be assessed in every possible scenario before any customer ever climbs aboard one. This is what regulators are best at, and they already have the necessary processes and talent in place to make it happen.

2. Walk: Once certified, rides will be offered to the public in a limited way. Regulators will be evaluating safety, of course, but will also ensure that ride providers are prompt, organized and offer high-quality service to their customers.

3. Run: Once the ride service has proven its ability to operate at the highest level, other routes will be opened up. A higher volume of flights from existing vertiports will be allowed. New vertiports (specifically for eVTOL) will open and new routes will be established.

Step 2 . Build out new infrastructure (vertiports): Once the aircraft is proven on existing infrastructure, the market will demand more routes, thus requiring the build-out of new infrastructure. The key requirements are access to charging, air clearances, and proximity to ground transportation. These vertiports will not require much investment, just the charging capability as previously discussed.

In the early years, new vertiports will likely be built on city outskirts, thus allowing city-to-city hops while minimizing the need to fly over other infrastructure. Fortunately, for a variety of reasons, most cities are built near bodies of water, which provide ideal routes for air taxis. Real estate developers will soon realize how lucrative these infrastructure investments can be, and the private markets will play a meaningful role in opening up new routes.

Step 3 . Rooftop expansion: In the long term, vertiports will be built on top of existing buildings, enabling hops from building to building within a city. This will happen but will likely be the last infrastructure use case. Multibillion-dollar companies will flourish long before this becomes a reality.

The drone industry has been working on a solution. Drones have a more immediate challenge as there is no pilot onboard to communicate with air traffic control. As a result, companies like Airmap have been working on UTM (shorthand for unmanned aircraft system traffic management). UTM software is rapidly becoming a critical requirement for any consumer or commercial drone, because it helps drone operators automatically request authorization for flights, checks air space restrictions or warnings, and ensures deconfliction with other aircraft.

As drones become more ubiquitous, air taxis may be able to piggyback on UTM, thus allowing for an air traffic management system that automatically coordinates the operation of all types of aircraft in a safe and seamless manner.

A note on autonomy

In the short to medium term, air taxis will be piloted. This approach allows for standardized aircraft certification processes and air traffic control systems  —  and therefore faster commercial deployment.

However, in the long term, the market will likely transition toward autonomous air taxis. As futuristic as it sounds, it is not a wildly challenging problem  —  and is a simpler matter to address compared to self-driving cars. First, there are fewer obstacles in the sky. Second, there is a whole other physical dimension to keep vehicles from hitting each other. And third, aircraft have been effectively “automated” for many years. Most commercial airliners have robust mid-flight “autopilot” functionality, requiring pilots only for outlier situations.

Of course, this new capability will require rigorous testing and a new certification protocol. However, we expect that autonomous air taxis will become commercially available sooner than expected.

Ford and GM don’t own highways, just as Airbus and Boeing don’t own airspace. Similarly, air taxi manufacturers and service providers must share the skies among each other and with other types of aircraft. Routes should be open to any air taxi meeting regulator requirements. Dan Elwell, acting administrator at the FAA, reiterated the FAA’s goal of integrated airspace at the 2018 Uber Elevate conference.

In the conventional aircraft world, both public and private airports exist. Private airports can restrict landings except in the event of an emergency. The early years may require privately funded vertiports, but publicly accessible vertiports should be opened up quickly. Whether funded privately by savvy real estate investors or publicly by transportation authorities, in the future we will see a tremendous number of vertiports accessible by a wide range of certified air taxis.

Sharing and collaborating on protocols will ensure healthy competition and the fast growth of the industry. For example, if air taxi companies converged on a set of electric charging requirements, then each vertiport would be robustly equipped to handle any existing and future aircraft. Similarly, convergence on air traffic management systems will ensure consistent awareness of where all other vehicles are and optimize traffic flow, thus providing better service for consumers. Regulators are already leading here and must continue assembling coalitions of the willing.

The air taxi industry will only be successful if the communities in which they operate are engaged early and if their needs are met. This means rides will be affordable for the vast majority of the community, not just the elite. This means vehicles will be quiet enough to not disrupt your conversation with a neighbor. This means flights will be spaced out and at the appropriate altitude so that your view isn’t marred by a ubiquitous swarm of aircraft. To this end, companies should co-design the service with communities and even facilitate public-private initiatives to kickstart the conversation.

By following these recommendations, the air taxi industry has a legitimate chance to thrive and realize its true positive potential.