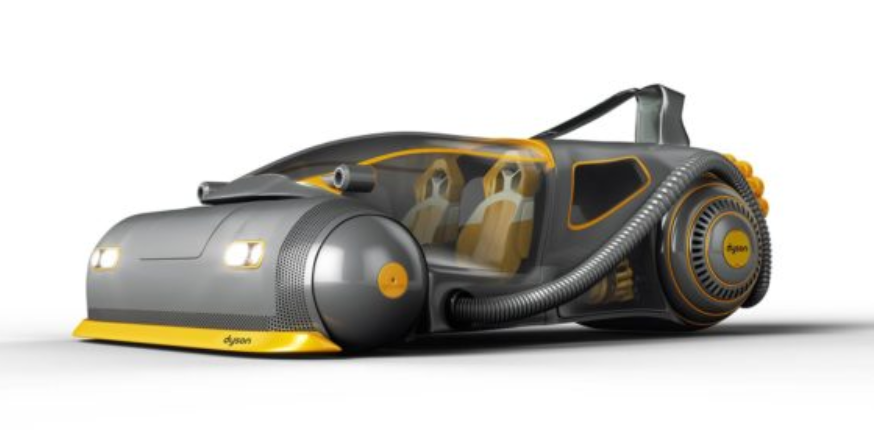 Thank heaven for the old RAF airfields that dot the British countryside, for they provide the local population with lots of fond memories and empty buildings that can be repurposed for other things. The racing circuit at Silverstone is built atop the bones of a World War II airfield, whose vacant hangars once provided indoor space for the teams who raced there. James Dyson, the enigmatic billionaire who heads Dyson Ltd, has just announced that his company is plowing $150 million into improving Hullavington airfield, a facility the company purchased in 2017.

The newly renovated Hullavington will house a test track and a new tech center where up to 2,000 engineers will devote themselves full time to developing an electric car. “What we’re doing is quite radical,” Dyson told GQ recently. His interest in automobiles began in the early 90s after he had brought his first cyclone vacuum cleaner to market. He was disgusted by the crud pouring out of the tailpipes of diesel powered vehicles. “All I could see and smell were these huge clouds of diesel exhaust coming out,” he says.

Adapting parts from his vacuum, he began working on filters for diesel exhaust. “In 20 minutes from a transit van you could get nearly a cup of this black sud,” Dyson says. But everyone insisted diesel engines were actually quite clean burning. Nobody was interested in Dyson’s filters, so he shelved the project.

In 2015, Dyson made his one and only investment in an outside company — Sakti3, a small startup in Michigan that claimed it had learned how to make solid state batteries with twice the energy density and no risk of fire. Then last spring, Dyson gave up on all the patents Sakti3 had filed over the years. The tech community was sure that meant Dyson’s £15 million investment was now worthless and the solid state battery nothing more than vaporware.

But an anonymous source — who is working on solid state battery technology at another company, tells GQ he’s not so sure. “I think they’ve built on the technology. Not necessarily that they’ve gone in a different direction, but they have evolved it. I think he must have developed it into a different place. I think he’s moving towards something he believes he can launch,” he says.

Indeed, earlier this year Dyson Ltd filed for a patent in the UK. Entitled “Method Of Fabricating An Energy Storage Device,” it goes on for page after page with technical details. At the end, it says simply, “The invention provides a simple, fast and low-cost way of producing a solid-state cell.” Take that for what it’s worth.

“We Ought To Be Making A Car”

Dyson tells GQ he woke up one day and said, “Yes, I just thought we ought to be making a car, as simple as that. One gets passionate about it because of technology. You realize what the technology could do. With motors, if you can magically change the technology, you can magically change a product.” Dyson may (or may not) be referring to the electric motor in his latest product, the V10 cordless vacuum, which spins at 125,000 rpm. It takes advanced AI to control the motor so it doesn’t overheat or wrench itself out of the hand of the user.

He also has some other technology sitting on the shelf at the company that could find a use in an automobile. The Dyson Airblade hand dryer uses two 400 mph air jets which could be used in place of windshield wipers. “The trouble with wipers is that they brush the muck back and forth across the screen. Eventually it causes scratches in the glass. Instead of a strip of rubber — which needs to be regularly replaced — wiping the screen, you’d have an invisible jet of air moving across it.”

Then there is the Dyson robot vacuum. 17 years in the making, it uses panoramic cameras and artificial intelligence to learn its environment so it can clean the carpets without sucking up any stray socks. Apply that technology and you are on your way to building a car with at least Level 2 autonomy.

Pressed for details about an electric car, Dyson says it will not be a sports car. It is also likely to be pricey. “We’re not going in at the LEAF end of the market, ” he says. It will have at least Level 2 autonomy and it may not look much like any car you have ever seen before. Come to think of it, none of the other products the company makes look like fans, vacuum cleaners, or hair dryers either.

Dyson has manufacturing plants in Singapore and Malysia, but he won’t say where his electric car — if there is one — will be made. All we know is that the company does not rely on outside suppliers. Instead, it prefers to make every part for every product in house.

Where Elon Musk is brash, Dyson is measured. He will never have the issues with short sellers Musk has because his company has always been privately owned. But like Musk, he worries about details a lot. “Worrying, thinking, trying to solve problems. There are sleepless nights now. This car really matters to me. It really matters to all of us here. It’s a big deal. We want to get it right.” Now age 71, he says, “I’m working harder than I ever have in my life.”

Recently, the Financial Times (subscription) had this to say about Dyson’s more than $2.5 billion bet on electric cars. “The £2 billion gamble is the appliance maker’s boldest yet, one that will either grow to define the brand as it dwarfs its other products — or drain its resources and potentially plunge it into oblivion.” Asked about that comment by FT, Dyson says mildly, “Maybe they’re right.”

The timetable calls for production of the Dyson car to begin in 2020 with the first examples going on sale in 2021. With all the major car makers rushing to bring electric cars to market at about the same time, is Dyson worried? Yes, but he’s not scared. Anyone who can convince people to part with $400 for a hair dryer knows a thing or two about marketing. And if, in fact, he now owns the technology that will make safer batteries with double the range of today’s lithium ion battery packs, Dyson won’t even need to sell very many cars to profit handsomely from his investment in Sakti3.

But he may have his eye on even bigger fish. Dyson has a fascination with aircraft. The runway at Hullavington is staying, he says. Asked what applications solid state batteries might have, that anonymous source at another battery company told GQ, “I would say aviation because they’re so safe. Unlike lithium, they’re not flammable. If your laptop or your car catches fire, that’s bad. But on a plane, that’s a different league. And so for the aerospace industry that would be really interesting.”

Asked if an electric airplane might be on his radar screen, Dyson gives a rare grin and says, “Yeah. I think electric planes — batteries and planes are important.” Is James Dyson already making plans for something even bigger than electric cars? If he does, he has the perfect place to test his ideas — an entire former airbase in the British countryside.