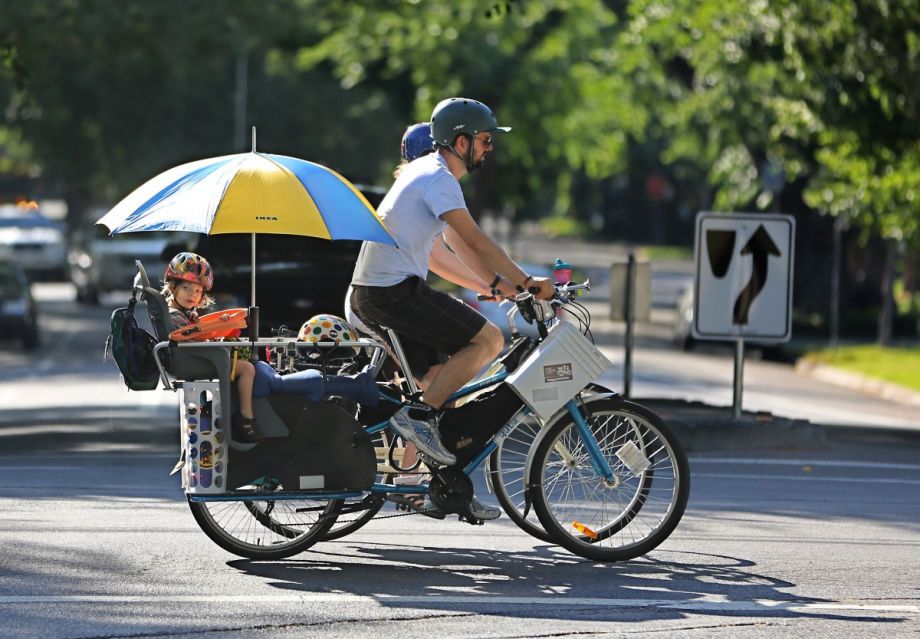 Davis, California, has long held a special place among U.S. bicycle cities. In 1967, it was the first to paint official bike lanes. It has since built bike infrastructure on 76 percent of its streets, which has helped boost the city’s bike commuter mode share to a nation-leading 20 percent. Despite that, Davis — along with neighboring Sacramento, itself ranked in the top 15 large cities for bicycling mode share — has been slow to adopt bike-share, even though cities and bike advocates have rallied around bike-share as a must-have addition to bike networks.

That will soon change, however. After six years of discussions and planning, Davis, Sacramento and the city of West Sacramento are finally getting a bike-share system in May 2018. They are making up for lost time by jumping straight to the next iteration of shared bicycles: electric bikes. The Sacramento Area Council of Governments (SACOG), and cities of Davis, Sacramento and West Sacramento have been working with private bike-share company Social Bicycles (SoBi) to plan the system. SoBi will finance, own and operate the system when it launches.

SoBi has been operating a preview system with 50 non-electric bikes in Sacramento and West Sacramento since May. The full system is slated to kick off on May 15, 2018, with 300 bikes. SoBi will introduce another 600 bikes in the summer. All 900 will be electric, pedal-assist bikes, making it the largest e-bike bike-share scheme in the country. (A group of cities and towns in the Boston region has started discussing a similar system.) Pedal-assist bikes provide users a power boost when they pedal, meaning they can cover more distance with less exertion. The system will be based around bike-share stations that will likely serve as charging stations, but each bike has a built-in lock and can be parked anywhere within the system area.

One of the big questions often raised with electric bike-share is how to ensure the bikes are charged. According to a SACOG spokesperson, planners are still in the process of figuring out the answer. Two ideas on the table are building charging stations, and offering incentives to users to return bikes to the docks for charging. SoBi introduced e-bikes in Washington, D.C., and San Francisco earlier this year. In D.C., users get a $1 credit for returning a bike to a station.

Unsurprisingly, biking advocates are excited about the possibilities in Northern California.

“I see a lot of first-mile, last-mile potential for the system,” Jim Brown, executive director of Sacramento Area Bicycle Advocates, says. “Sacramento is a very spread out place. People travel regionally. Instead of driving all the way in and parking downtown, some people could ride light rail in from Folsom, then check out a bike and finish their trip.”

Though the Sacramento region is quite flat, the pedal assist will be a major boon in the summer when the temperatures soar and even the hardiest bicyclists are loath to travel under their own power.

“We have really hot summers here,” Brown says. “I don’t have a car. I travel by bike. I’m never eager to head out on a bike in the middle of the day in the summer.”

Dan Fuchs, president of Bike Davis, expects the e-bikes to draw in users who might not otherwise consider traveling by bike.

“I think it’ll be revolutionary for a lot of people,” he says. “People don’t know about e-bikes in the U.S. … Davis’ older population could be well served by them.”

There is little consensus in the U.S. about the best model for bike-share. Some say systems should be publicly funded like city buses or subways are. Lots of cities use public-private partnerships. In the last year, private, dockless bike-share companies have made major inroads in U.S. cities. Brown says the private model the Sacramento region is using gives him some pause.

For one, there’s the risk of SoBi going out of business and taking its bikes with it. “This is an entirely privately funded system,” he says. “Providers like SoBi have faced competition from Lime Bike and Spin and other operators in other cities.”

Brown is also concerned about making sure all neighborhoods get equal access to the system. “When it’s a private system, there’s less leverage to make the equity argument,” he says. “But it’s an important issue, of course.”

It’s a question the planners have been working on, though there isn’t a final answer yet. Brown thinks one potential solution is to integrate the regional transit smart card system into the bike-share system. “I see that as one of the easy ways of addressing income disparities,” he says. “That way housing and food assistance programs can distribute cards and you’re not reliant on smartphones to check out the bike.”

Those cautions noted, Brown is excited to see the country’s largest electric bike-share system launch in his city. “I keep hearing about pedal-assist bikes being the next wave of innovation,” he says. “Sacramento is seldom ahead of the curve, but we might be on this one.”