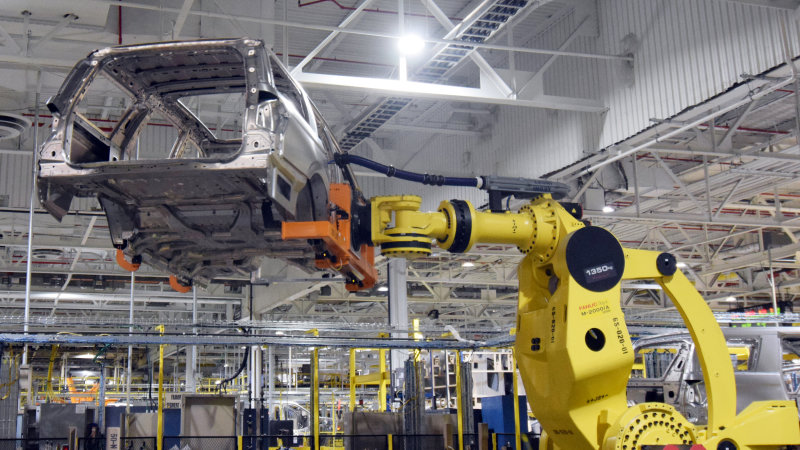 Even as many automotive assembly lines look like a scene from a dystopian science fiction movie, with robots performing everything from welding to painting with nary a living, breathing human being in sight, automakers are hiring more people.

That’s according to an analysis published by Bloomberg, which analyzed employment and other data from the 13 publicly traded automakers with at least 100,000 workers at the end of their most recent fiscal years. It found that between the end of 2013 and 2017, 11 of the 13 companies had grown their staffing levels by a combined 3.1 million employees, a gain of 11 percent. Nissan and General Motors were the only two that shrank their labor forces, by 2.8 percent and 18 percent, respectively — and GM’s numbers were affected by its sale of its European Opel-Vauxhall division in 2017 to PSA Groupe.

The analysis included three Chinese automakers — BYD, SAIC Motor Corp. and Dongfeng Motor Group. Steve Man, an analyst at Bloomberg Intelligence in Hong Kong, told the outlet that automakers in China and other fast-growing markets favor human labor because it requires less upfront investment. At plants in developed markets like the U.S., automation is generally already well established, but automakers are hiring in R&D and software development as the industry shifts toward electric, autonomous and connected vehicles.

In 2017, the consulting firm McKinsey published a white paper saying that industrial robotics are becoming cheaper and more capable of tasks that weren’t previously a good fit for automation, making it likely that companies will use more and more of them — especially technologies like 3D printing and CNC cutting. But author Jonathan Tilley, a senior expert at McKinsey, warned that “It can be all too easy to get carried away with automation for its own sake, but the result of this approach is almost always projects that cost too much, take too long to implement, and fail to deliver against their business objectives.”

His words bring to mind the example of Tesla and its highly automated assembly plant in Fremont, Calif. Elon Musk earlier this year acknowledged that too many robots may have been responsible for some of the problems that have famously plagued production of the Model 3 sedan and that the plant would benefit from more human operators.