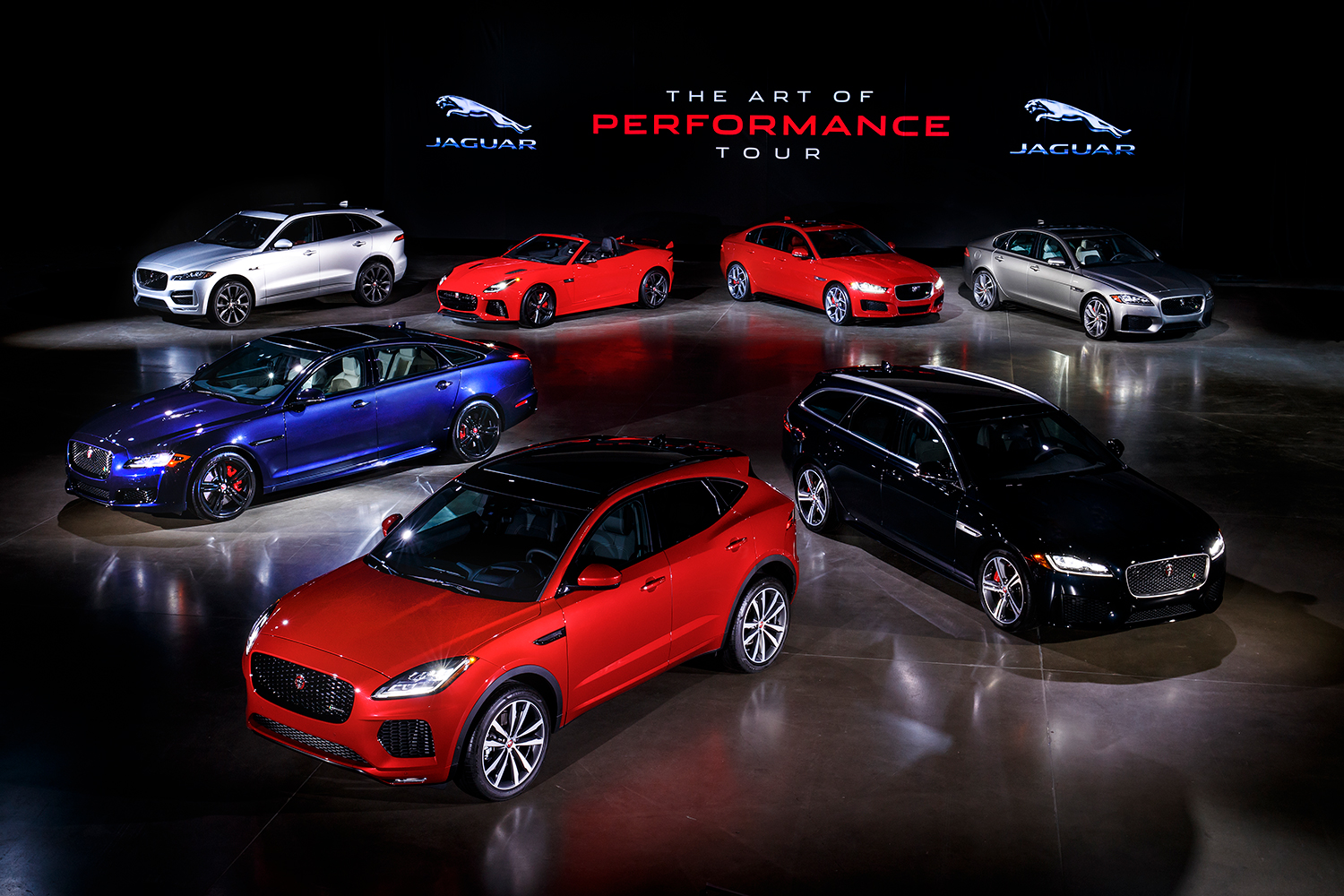 An inside look at Jaguar’s goals and directions

Like a Formula One race car tearing through turns, Jaguar Land Rover has been flying.

The company has brought out a new vehicle every few months this year. We’ve seen the all-new Discovery and Velars on the Land Rover side and a trio of new models from Jag, including the E-Pace compact crossover, the XF Sportbrake wagon, and the ultimate XJR575 powerhouse sedan. There’s no grass growing under Jaguar Land Rover’s feet, so we sat down with two of the brand’s leaders on the design and business sides of the house to find out where they plan to take things next, and why.

David Larsen is GM of Product Management at Jaguar Land Rover North America, so he’s deeply responsible for the brand’s trajectory in the United States. Just a few years ago, Jaguarseemed destined to be the war wagon of choice for retirement communities in the sun belt, but today that’s all turned around with new models like the F-Type sports car and the F-Pace – the brand’s first crossover SUV. Now this fall, Jaguar is assaulting the largest single market segment in America with the E-Pace compact crossover SUV.

“Jaguar’s approach is that it’s got to be a sports car,” Larsen insists. “It’s our DNA. With the E-Pace that we just introduced, this vehicle has the functionality of an SUV but it’s really, at its heart, a sports car. You can see that through the styling elements on the exterior. But it’s really in the driving dynamics of the car. When you get a chance to experience it, it’s phenomenal. It drives more like the F-Type.”

“We intend to attract the home buyer with the E-Pace,” Larsen said. “We’re definitely looking to expand volumes. We’re doing that by competing in segments we haven’t done before. A little over a year ago, we only had three models. XF, XJ, and F-Type, and the entry point to the brand was at $50,000. In the last year, we introduced XE and F-Pace, and F-Pace became our number-one selling model within its first year. We could’ve just taken an F-Pace and made a scaled down version. The overall silhouette is similar, but the styling cues and the overall appearance of the E-Pace is dramatically different.”

“We picked up cues off the F-type to give it that sportiness, without too much ambiguity,” Callum said. “It’s like a re-proportioned F-type in some ways. I think people see the charm and the fun in that. I think with each car, what we’re trying to do now is to just give them all a little bit of their own character.”

Character was also on Larsen’s and Callum’s minds when they created the 2018 Jaguar XF Sportbrake. It’s a bold move for any automaker to put forth a station wagon these days, but Jaguar made it sexy by giving the XF wagon it 380 horsepower supercharged V6 and the S suspension and driving dynamics package. The XJR575 is similarly designed to take the staid XJ sedan to the extreme. Featuring a 575 horsepower 5.0-liter supercharged V8 engine and a brake and suspension package, this big cat will hit 186 mph. Carrying an MSRP of $122,400, this Jag sedan is built for the race course, not the golf course.

Like all automakers, both Larsen and Callum wanted to talk electric and autonomous. Jaguar revealed its I-Pace electric SUV concept a year ago at the 2016 Los Angeles Auto Show, and says it will be available for purchase by the second half of 2018. For the moment, the I-Pace is still the North Star for Jaguar.

“The I-Pace is a completely different vehicle altogether,” Callum relates. “It is designed in a very different way because it is electric. It means from the ground up we can really design the body and the position of the cabin where the occupants are where we want them to be. They don’t have to sit behind an engine, because the engine’s underneath. It’s between the wheels. And so a lot of the predetermined dimensions of the conventional car have gone. It gives you freedom, really.”

From a product management perspective, Larsen sees potential for success in the I-Pace.

“I think we have a unique opportunity with the I-Pace,” Larsen said. “We didn’t take an existing platform and electrify it or modify it. This vehicle was designed from the beginning as an electric vehicle. You’ll look at the I-Pace and you’re not going to say, ‘Oh, that’s an electric car.’ You’re going to say, ‘Oh, that’s a great looking car.’ The styling is incredible.”

“The transition to electrification is actually going to take place in Europe a lot quicker than in the U.S.,” he declares. “The reason for that is it’s been a diesel game over there. Because maybe a year ago or more than a year ago, before Dieselgate, diesel was the highest majority of the powertrain offering in Europe. Everything was diesel. You’re seeing an extreme shift out of diesels right now, into petrol. People in Europe aren’t sure what to buy. There the acceleration of electrification is actually moving a lot faster.”

ALWAYS A PLACE FOR THE DRIVER

As a driver’s brand as well as a luxury brand, Jaguar has a fine line to walk with the adoption of autonomous technology. They know they need to keep current with technology, but at the same time, there’s almost 100 years of Jaguar heritage written at race tracks and rally courses around the world.

“Never say never,” Larsen says. “We’re on a path toward autonomy. We’re introducing features in our vehicles today that are going to be further developed towards that autonomous future. Jaguar Land Rover, but Jaguar especially, envisions a world where you have autonomous driving, but you also have the option of having what they call engaged driving. Once you get out of that urban environment where you don’t want to be driving, yeah, you want to hit the country road being in an engaged car.”

One concept Jaguar Land Rover is presenting is their “Sayer” steering wheel. In this vision of the future, you might use several different vehicle platforms, but the steering wheel would go with you from car to car, and carry your personal preferences.

“The concepts behind the Sayer steering wheel are fantastic,” Larsen says. “The notion that I’m going to have this bit that has all of my preferences and everything else so that it doesn’t matter whether it’s my own car or I’m picking one up. I plug in the steering wheel that’s got all my preferences in it.”