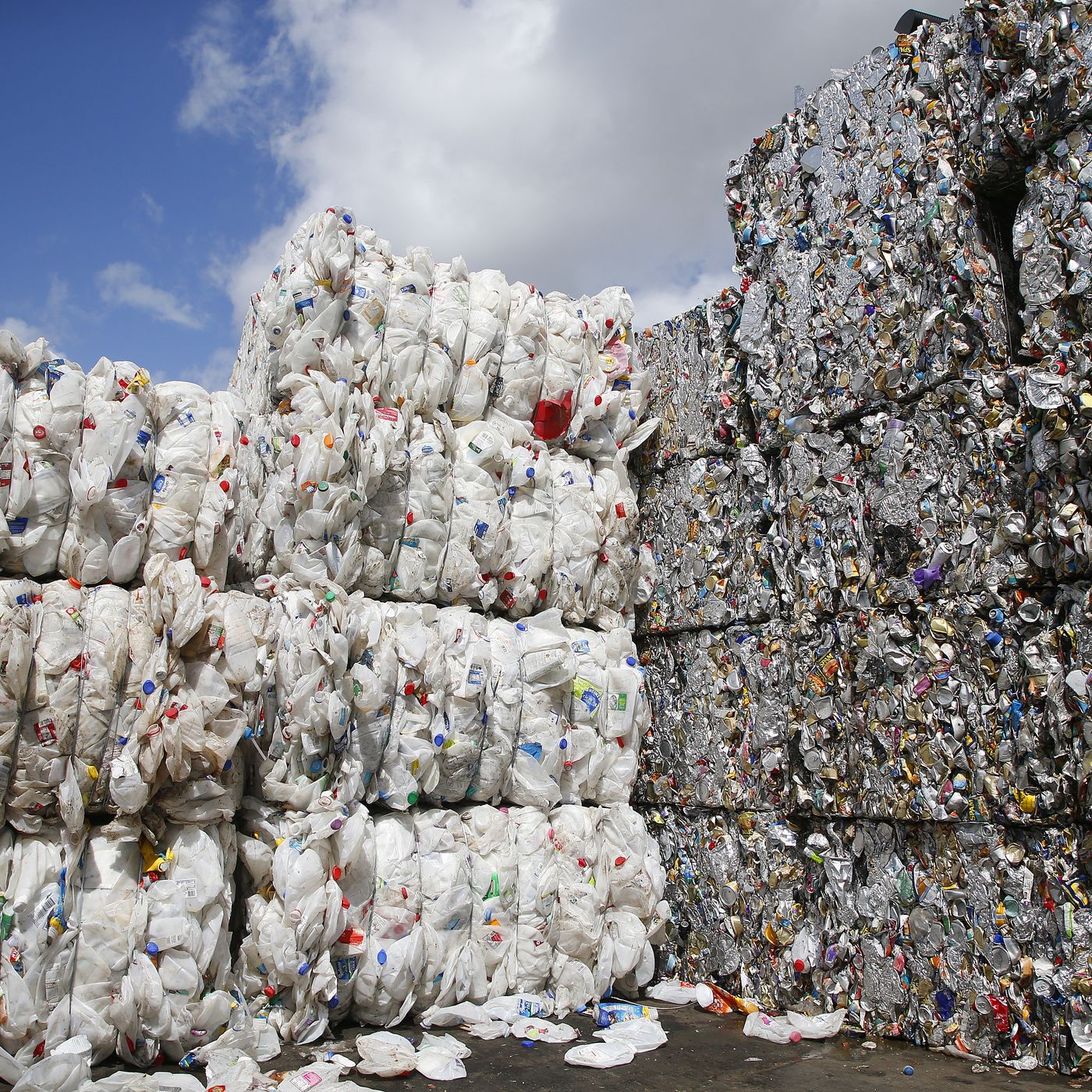 Can drinking water out of a can really save us?

Recycled aluminum is coming for your water and your iPad. Making products out of used aluminum is now a way for companies like Coca-Cola, PepsiCo, and Apple to show a commitment to greening their manufacturing. Customers are supposed to be able to sleep a little better at night knowing that the shiny thing they bought did some good for the planet. But is aluminum’s future as bright as the hype suggests?

The man formerly known as Aquaman sure thinks so. Jason Momoa announced in April that he’s partnering with Ball Corporation to produce a line of canned water, called Mananalu. Saying goodbye to Aquaman and the other bearded characters he’s played, the action star caused a buzz when he shaved off his beard on camera to promote aluminum as the cure to Earth’s giant plastics problem. “Plastics are killing our planet. And I think I have a solution,” Momoa says in the video, clippers in hand. “There’s only one thing that can really help our planet and save our planet, as long as we recycle, and that’s aluminum.”

He’s not alone. Coca-Cola and PepsiCo announced this year that they’re working to roll out water packaged in aluminum as part of their efforts to cut down on plastic waste. There’s also the line of Liquid Death drinks that claims to “murder your thirst” with mountain water in “eco-friendly cans.”

The tech sector wants in on the aluminum revolution, too. During this month’s Apple event, the tech giant announced that its new iPads and Apple Watches would feature components fashioned from 100 percent recycled aluminum. The announcement builds on the commitment it made last year to make the enclosures of its MacBook Air and Mac mini out of the recycled material. “We’re pioneering a future where we no longer need to mine precious materials from the Earth to make our products,” Apple said in its 2019 environmental responsibility report.

ALUMINUM CAN BE RECYCLED INDEFINITELY

It’s easy to see why so many companies fall for aluminum’s environmental appeal. It can be recycled indefinitely. An aluminum can can become yet another aluminum can pretty much without losing anything in the process. Most food-grade plastics, in contrast, are “downcycled,” their quality degrading each time they’re rehashed.

The Aluminum Association, an industry group, says that almost 75 percent of all the aluminum ever produced to date is still in use today. On the other hand, only 9 percent of all plastics ever made have been recycled, according to a study published in the journal Science Advances in 2017. It found that 6.3 billion of the 8.3 billion metric tons of all the plastic ever made has become waste. What to do with all that plastic became an even bigger dilemma for the United States last year after China announced that it’s no longer accepting low-grade plastics for recycling.

Recycling aluminum saves about 90 percent of the energy it takes to make new aluminum, which is great since mining bauxite ore and turning it into aluminum is pretty environmentally destructive and energy-intensive. It takes about twice as much energy to produce new aluminum as it does to produce new plastic.

“THEY COULD PUT WATER IN SOLID GOLD CONTAINERS (VERY EASY TO RECYCLE), BUT THAT WOULDN’T BE BEST, RIGHT?”

So to reap the most environmental rewards of using aluminum, companies and individuals ought to make sure they’re sinking their money into recycled aluminum, not virgin aluminum. It’s unclear from PepsiCo’s announcements whether it’ll use new or rehashed aluminum in its new line of products. PepsiCo didn’t immediately respond to The Verge to clarify. A spokesperson for Coca-Cola told The Verge in an email that its aluminum packaging “will be made of up to 70% recycled content.”

Switching over to aluminum from plastic “partly solves one problem (less plastic) but creates a new problem (more aluminum),” Thomas Kinnaman, a professor of economics at Bucknell University who researches global recycling trends, told The Verge in an email. “They could put water in solid gold containers (very easy to recycle), but that wouldn’t be best, right?”

And then there’s the question of cutting down waste versus just making a different type of litter. Humans are far from perfect, and while some of the new aluminum cans will get recycled, others could easily end up in the trash. The Aluminum Association says that each year, Americans send more than $700 million worth of aluminum cans to landfills. What if instead of buying either a plastic bottle or aluminum can to quench our thirst, we took a trip to the water fountain or refilled a reusable thermos?

“THERE’S NO EASY ANSWER. EACH ‘SOLUTION’ HAS ITS OWN CHALLENGES.”

Wood Mackenzie, an energy research company, looked into the pros and cons of aluminum versus plastic to forecast what might win “the water bottle war.” “There’s no easy answer. Each ‘solution’ has its own challenges,” it wrote in its initial findings. There hasn’t been as much incentive to can water in the past because plastic is cheaper. The added cost of aluminum might have made more sense for pricier drinks like beer and soda that could also benefit from the added shelf life that canning provides. But the use of aluminum for beverage packaging has been on the decline as people started to turn to less sugary drinks over soda. Uday Patel, senior research manager at Wood Mackenzie, tells The Verge that this trend could change as a result of the bad reputation that plastic bottles seem to be getting. And the plastics industry, he believes, is “concerned.”

The aluminum fad isn’t just taking over the beverage industry. When it comes to electronics, Apple making its products with 100 percent recycled aluminum might set a promising precedent, but the net environmental benefits aren’t totally clear yet.

In 2017, aluminum was responsible for about a quarter of the company’s carbon footprint from manufacturing, according to its environmental responsibility report. The following year, the company said that it reduced emissions from aluminum in its products by 45 percent. “What they’re trying to do is, is quite difficult, quite complicated. And in many ways, I think they should be lauded for their use of recycled aluminum,” says Josh Lepawsky, a professor at Memorial University who maps the international movement of electronic waste.

“The actual nitty gritty of whether there’s a genuine energy and material savings when it comes to Apple’s processes is really difficult to say for sure” based on the information they make public, Lepawsky tells The Verge. There may be added emissions from transportation, for example, that come from sourcing recycled aluminum. Lepawsky also points to a phenomenon called the Jevons paradox. In the 19th century, William Jevons found that increased efficiency in using coal for energy led to using more coal, not less of it. The same could happen for aluminum as its popularity rises, leading to not only more aluminum waste but potentially more mining for its raw materials as well.

So, the aluminum shift is complicated. It could pay off for the planet, but only if products made with recycled materials replace those made with new aluminum and plastics — and if consumers worry more about cutting down on their waste than they do about which type of bottle to buy. But perhaps the bright spot in considering these questions is that it puts the spotlight on all of those environmental impacts of manufacturing, versus focusing mostly on what happens at the end of a product’s life.

“All too often, the concern around the environmental impact of electronics focuses almost obsessively on what happens to consumer’s devices after they supposedly throw them away,” says Lepawsky. “The amount of pollution and waste that occurs on the manufacturing side of things is hugely larger than the weight of materials that consumers get rid of, in the aggregate, after they stop using their devices.”