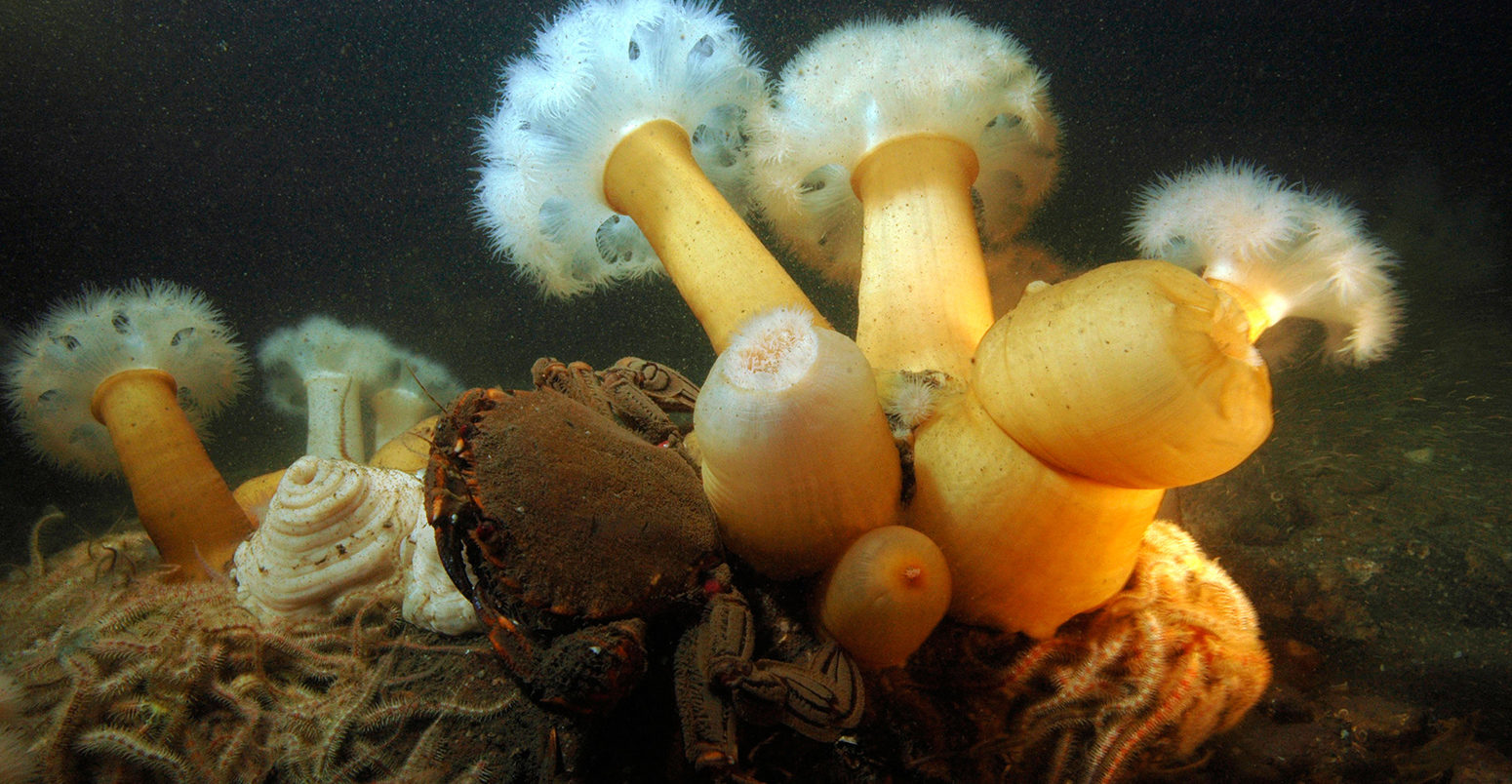 The world’s oceans could become “uninhabitable” for cold-water corals by the end of the century as a result of ocean acidification, research suggests.

Ocean acidification, which occurs as seawater takes up CO2 from the atmosphere, could threaten around 70% of cold-water coral living below 1,500 metres in the North Atlantic Ocean by 2050, the research finds.

Acidified waters that accumulate in the North Atlantic could then be circulated to the global seas via a system of ocean currents, the lead author tells Carbon Brief, which could have consequences for reefs across the world.

The findings reiterate how many coral reefs could “dissolve” and “crumble” as the world continues to warm, another scientist tells Carbon Brief.

Cold-water corals are found in deep, dark parts of the world’s oceans in both the northern and southern hemisphere. They can thrive at depths of up to 2,000 metres and in water temperatures as low as 4C.

This means they are unaffected by coral bleaching, a process which is heightened by climate change and poses a great threat to the survival of tropical reefs, such as the Great Barrier Reef.

However, both tropical and cold-water coral species are threatened by a process known as “ocean acidification”, which occurs as seawater absorbs CO2 from the atmosphere.

The oceans have absorbed around 30% (pdf) of the CO2 released by human activity since the industrial revolution. This has caused oceans, which are alkaline, to become more acidic over time. The overall pH of seawater has fallen from around 8.2 to 8.1 from pre-industrial times to the present day.

This change has altered the levels of a type of calcium carbonate known as aragonite in seawater. Some types of coral, known as “hard coral”, have tough outer skeletons that are made out of this substance.

In seawater, there is a boundary known as the “aragonite saturation horizon” (ASH). Above the boundary, seawater is saturated with aragonite, which provides preferable conditions for the corals. However, below the boundary, seawater is undersaturated with aragonite. These waters are corrosive to hard corals and, over time, can cause their skeletons to dissolve.

The new research, published in Nature, investigates how ocean acidification has caused the height of this boundary to change over time.

Using observational data taken between 2002 and 2016, the researchers find that cold-water corals tend to live in parts of the world where the ASH is still relatively deep, explains Dr Fiz Perez, a researcher at the Marine Research Institute in Vigo, Spain. He tells Carbon Brief:

However, even in the North Atlantic, the ASH is rapidly rising, the researchers find. In the Irminger Sea off the southern coast of Iceland, for example, the boundary has risen by 10-15 metres per year between 2002 and 2016.

As the boundary rises, the proportion of cold-water corals exposed to corrosive seawater also increases, Perez says. This is likely to continue under future CO2 emissions, the study finds.

Using statistical modelling, the researchers show that, in a future scenario – where the concentration of human-released CO2 in the atmosphere doubles within three decades – cold-water corals could be “severely” threatened. Perez says:

“With the current progression of carbon emissions, around 70% of North Atlantic cold-water corals will be affected by ocean acidification by 2050-60. Obviously, the proportion will be larger in the 2100, but it would depend on the pathway of future greenhouse gas emissions.”

The researchers also investigated how corrosive waters that build up in the North Atlantic could spread to other parts of the world via a system of ocean currents known as the Atlantic Meridional Overturning Circulation (AMOC).

This “global ocean conveyor belt” brings water from the North Atlantic northward towards to poles, before returning southward towards the equator at much deeper depths.

The research suggests that AMOC is transporting acidified seawater – which is undersaturated in aragonite – to the deep ocean, where it exposes deep-sea corals to corrosion. The transport of aragonite towards the deep ocean has dropped by 44% since the industrial revolution, the study finds.

Under their future scenario, the researchers project that the transport of aragonite could fall by as much as 79% compared to pre-industrial levels, which may “severely endanger cold-water coral habitats”. The global ocean conveyor could then “export this acidified deep water southwards, spreading corrosive waters to the world ocean,” the study warns.

The impact of ocean acidification on cold-water coral reefs could have far-reaching consequences for marine wildlife, Perez says.

This is because cold-water reefs are “ecosystem engineers”, providing a place for fish and shellfish to meet and breed in an otherwise barren landscape, he says:

“The important point is that a whole ecosystem is developed in the surroundings of the cold-water coral reefs.”

The reefs are also the breeding and spawning grounds of a number of economically-important fish, including Pacific cod, Pacific halibut and Atka mackerel.

Although scientists are still unsure as to how exposure to corrosive waters could affect the survival rate of cold-water coral, the findings indicate that many reefs are likely to “crumble” as the climate warms, says Prof Jean-Pierre Gattuso from the Institute for Sustainable Development and International Relations (IDDRI), who was not involved in the research. He tells Carbon Brief:

The findings show that climate change could make the ocean “uninhabitable” for cold-water coral by the end of the century, Perez says:

“If we continue the path of a ‘business as usual’ development, based on fossil fuel burning, the ocean will become uninhabitable for cold-water corals. Even if the humankind were able to keep below 2C of warming, many deep cold-water corals would be affected.”