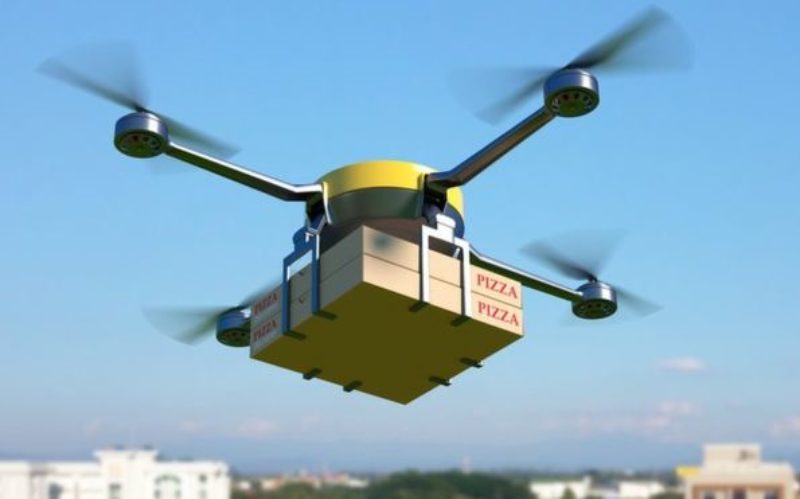 Why your pizza may never be delivered by drone

For years tech companies such as Amazon, Alphabet and Uber have promised us delivery drones bringing goods to our doorsteps in a matter of minutes. So why are they taking so long to arrive?

If our skies are to become as crowded as our streets, airspace rules need updating to prevent accidents, terrorist attacks, and related problems, such as noise pollution.

But that’s easier said than done. Here’s a rundown of the main issues.

According to a recent study by Nasa, the noise made by road traffic was “systematically judged to be less annoying” than the high-pitched buzzing made by drones.

“With the windows closed, even with double glazing, you can hear the drones,” one local resident told ABC News.

Consequently, limiting noise pollution is an important consideration for regulators, many of whom have forbidden drone deliveries after dark – precisely the time many hungry householders would like that takeaway meal delivered.

“Noise pollution has been an area of debate during the drafting of the new European rules,” says Yves Morier of the European Aviation Safety Agency (EASA).

Even with relatively few drones in the skies, the number of potentially dangerous incidents is worryingly high.

Just last month, a “rogue” drone closed Wellington Airport in New Zealand, while a UK drone user was charged with endangering lives by flying too close to a police helicopter.

And Venezuelan President Nicolas Maduro says he was recently the target of a drone “attack”.

Regulators are trying to take back control by implementing registration schemes.

“The vision is unified traffic management, digitalised, on all levels, from local to national and international,” Benoît Curdy, secretary general of the Global Unmanned Aircraft Systems Traffic Management Association (GUTMA), said in September.

“Registration is the first step, as it enables the authorities to know who is flying.”

“Rogue drone use is a major concern for us,” says the EASA’s Mr Morier.

“We cannot reduce the risk to zero, but we can take steps to limit it. These include making registration obligatory for drones weighing more than 250g.”

Delivery drones will fall rapidly out of favour it they fall rapidly from the sky after running out of juice or crashing.

In October, West Midlands Police reported a defect in its DJI Matrice 200 surveillance drone to the UK’s Civil Aviation Authority. The drone experienced a sudden loss of power even when it had battery charge remaining.

“The biggest challenge is to reduce the risk of collisions between drones and other aircraft,” says Mr Morier.

Wing says it has performed “tens of thousands of test flights” in the US and Australia, and is heading to Finland next year.

Its drones use “redundant motors, batteries and navigation systems with intelligent controls, so back-up systems can help keep aircraft safely in flight”, the company says.

But Beyond Visual Line of Sight (BVLOS) flights – where drones travel autonomously or are controlled by pilots remotely – are only likely to become viable once “detect and avoid” technology has been approved by regulators.

“Nasa has successfully built and flown a system this year,” the US Federal Aviation Administration (FAA) says. “But no ‘detect and avoid’ systems have received approval as yet.”

“There is no ‘detect and avoid’ technology capable of ensuring [that drones don’t collide with other aircraft] at the moment,” says Mr Morier.

For this reason it has stipulated that non-commercial drones cannot fly above 120m (394ft), although who polices this is another issue.

Most countries now have – or will soon have – rules in place for small drones capable of carrying out surveillance or making deliveries. And bigger sky taxis are also in development.

“Some companies are already testing full-scale prototype pilotless air-vehicles,” says the FAA. “The fast pace of change is fundamentally changing the role of the regulator.”

But the rules on how and where you can fly drones differ widely from country to country.

In Saudi Arabia, all drones are banned.

While more than 50 countries belong to Joint Authorities for Rulemaking of Unmanned Systems (JARUS), a final set of standards has yet to be agreed.

Susanne Schödel, secretary general of FAI, the World Air Sports Federation, says: “Authorities are working on this on a global scale, but integrating drones into the airspace is a very complex undertaking.”

One widely accepted standard is that drones will, initially at least, operate only in lower airspace, leaving the higher airspace free for commercial aircraft.

Where are we now?

First developed for military use during World War One, drones are now a global industry that investment bank Goldman Sachs expects to be worth $100bn (£79bn) by 2020.

Their commercial potential is already being exploited in many parts of the world, albeit on a trial basis.

In Switzerland, the national postal service Swiss Post has started using drones to ferry laboratory samples between hospitals in Lugano and Bern.

In China, e-commerce giant JD.com has been sending packages by drone in certain rural areas since last year.

And residents of a remote First Nation island in northern Ontario, Canada, will begin receiving goods by drone in 2019.

“We fear recreational airspace users such as paragliding pilots and hot air balloonists will have less freedom,” says Ms Schödel.

So if you’re expecting a drone to deliver your pizza any time soon, you’re likely to go hungry.