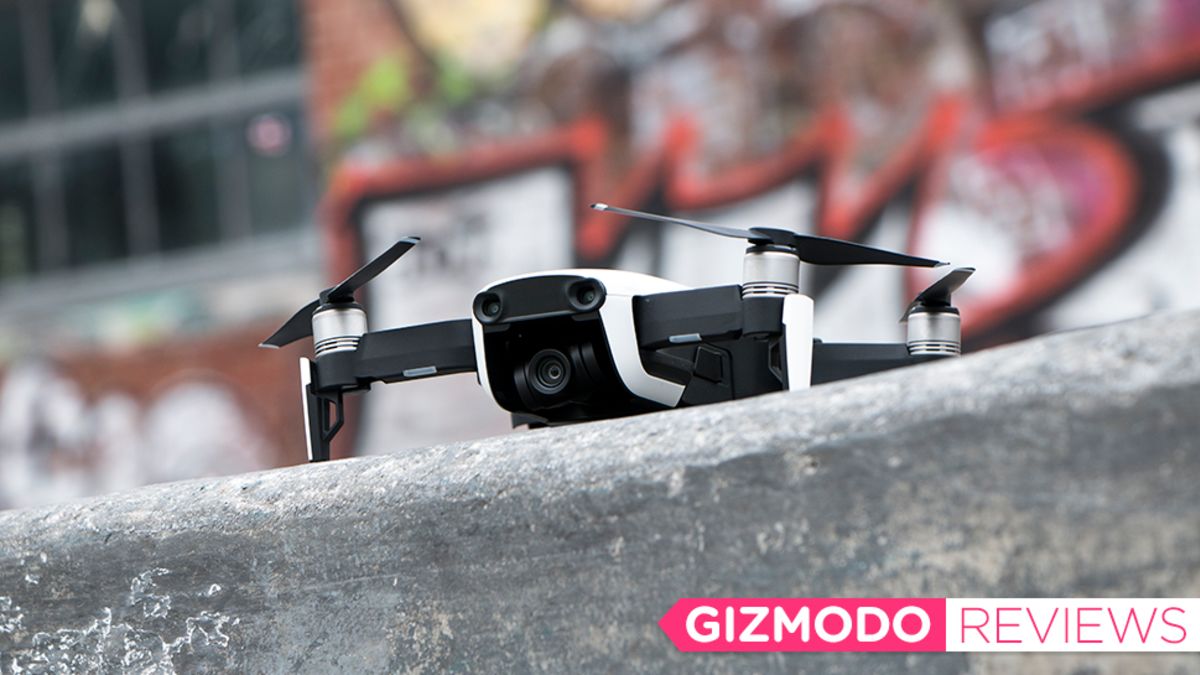 In the past couple years, you could ask a drone to be two things: good or small. But never both. The Mavic Air changes the game. In fact, I’d go so far as to say that the Mavic Air wins the game, and things will never be the same.

At just under one pound and just over six inches long, DJIs new folding drone fits comfortably in the palm of your hand. I’ve described its big sibling, the Mavic Pro, as being about the size of a hefty Italian sandwich when all folded up, but the Mavic Air is more like half a BLT. Unfolded, it’s no wider than a frisbee. That’s so small, it makes the Spark, DJI’s smallest drone, basically look stupid, since it doesn’t fold it all.

It’s worth ranting about the Mavic Air’s size, if only to highlight how impossibly feature-filled the drone still manages to be. Those features include a new obstacle avoidance system that DJI calls APAS (Advanced Pilot Assistance Systems). Thanks to seven cameras—two on the rear, two underneath, two in front, and the main camera—the drone creates a realtime 3D map of its surroundings, and rather than stop when it senses an obstacle, the Mavic Air will autonomously fly above or around it. Without APAS turned on, the drone still stops if an obstacle appears in front of or behind it. That’s still better obstacle avoidance than the Mavic Pro which only has obstacle avoidance cameras on the front and bottom of the drone. The only other DJI consumer drone with rear-facing cameras is the $1,500 Phantom 4 Pro. The Mavic Air costs $800.

What you get for 800 clams is a drone that flies just as steadily as the $1,000 Mavic Pro and even faster than the big bad Phantom. (The Mavic Air can go 42.5 miles per hour!) You also get a camera that shoots at a higher bitrate than the Mavic Pro, which means the image quality in videos is better. The Mavic Air also comes with a couple of new Intelligent Flight Modes—Boomerang and Asteroid—that aren’t yet available on the other DJI drones. We tested these new features as well as the basic drone features in the stupid cold New York winter, and the Mavic held up admirably. More on those tests in a second.

The Mavic Air makes the most sense for the adventure set. This little nugget fits nicely in any sized backpack, and with the help of a $30 carrying case, you can clip it to your belt. And since it’s so light, you can hike or bike or climb or snowboard or do anything without feeling like you’re lugging around a small aircraft—even though you are.

Unlike the Mavic Pro and the Spark, however, the Mavic Air lacks folding propellors. This is a good thing in some ways, as the folding propellors have a tendency to position themselves in weird ways and get caught on your bag. At the same time, the stiffness of the Mavic Airs propellors also makes them inclined to get caught on your bag or pocket, and if you don’t do it just right, sometimes they get in the way of the folding arms.

Once the drone is unfolded and powered on, the flight experience is similar to that of the Mavic Pro or even the Phantom 4. The remote looks almost identical to the one for the Spark, except there’s a switch for Sport Mode and the joysticks screw off for safe keeping inside the remote. (This is actually a big deal, as they’d otherwise make it hard to pull the remote in and out of a bag.) The bottom of the remote opens up to create a mount for your smartphone, and once you fire up the app, the drone connects to the remote and off you go. While I’ve seen some reports about people having trouble with the connection, the experience was almost flawless for me. I would add that I’m not in love with the involvement of the smartphone and the sometimes janky mount on the controller, although, I will admit that there’s no such thing as a perfect drone controller either.

The first thing you notice when the Mavic Air gets off the ground is the speed. This little shit is fast. Or at least, it feels fast, perhaps due to its size and the nimble handling that allows. The small size also means that small changes on the joysticks get a bit exaggerated in the air. If the much larger Phantom 4 flies like a Harley, the Mavic Air handles like dirt bike. It’s fun, too! Basic maneuvers, like getting a nice panning shot of a sunset, are still easy to make steady, but if you want to get wild, you can hit max speed on Sport Mode with the flip of a switch. Beware that the obstacle avoidance features do not work on Sport Mode. I learned this lesson the hard way a few years ago.

Like the Spark, the Mavic Air features gesture control. That means you can use your hands to do some very basic things, like make the drone go left or right and up or down. A new gesture involves moving two hands apart or together to make the drone fly forward and backwards. Gesture control still amounts to a silly parlor trick, since you can really only use it for selfies, but at least in the Mavic Air iteration, it actually works really well. In the Spark, it did not.

Where the Mavic Air really shines, however, is in image quality. Despite the fact that the drone’s camera isn’t much bigger than the one in your smartphone, you can’t expect the Mavic Air to produce high- quality footage. It is damn good for what it is. Right out of the box, the camera produces smooth and often stunning aerial footage, despite its compact size. The three-axis gimbal also holds up admirably, though you might need to adjust it mid-flight if it gets rattled. This was also my experience with the larger gimbal on the Mavic Pro.

This is all to say, the Mavic Air is simply terrific. It’s not the cheapest drone on the market, and it’s not the most sophisticated. It’s also not perfect. Aside from the couple of quirks mentioned above, there also seems to be an issue with the drone shaking in mid-air right after takeoff. YouTube is full of people complaining about this, and I experienced it myself. However, the problem seems to be related to temperature. If the motors are cold, the Mavic Air will shake. Once they warm up, the shaking stops. Other than that little thing I had nothing but fun with this drone.

Update: DJI tells me they’re pushing out a firmware update that should cure the shaking issue.

To the point that I don’t know why anyone would spend more money to get a bigger drone. Like the Phantom before it, I believe that the Mavic Air is now the best drone for most people. If you need extra range and battery life, the Mavic Pro is a fine choice. But otherwise, the Mavic Air has everything you need in a much smaller package. It’s actually extraordinary what this little thing can do. So much so I can safely say there’s nothing else like it on the market. At least not until, DJI decides to build another crazy little aircraft.