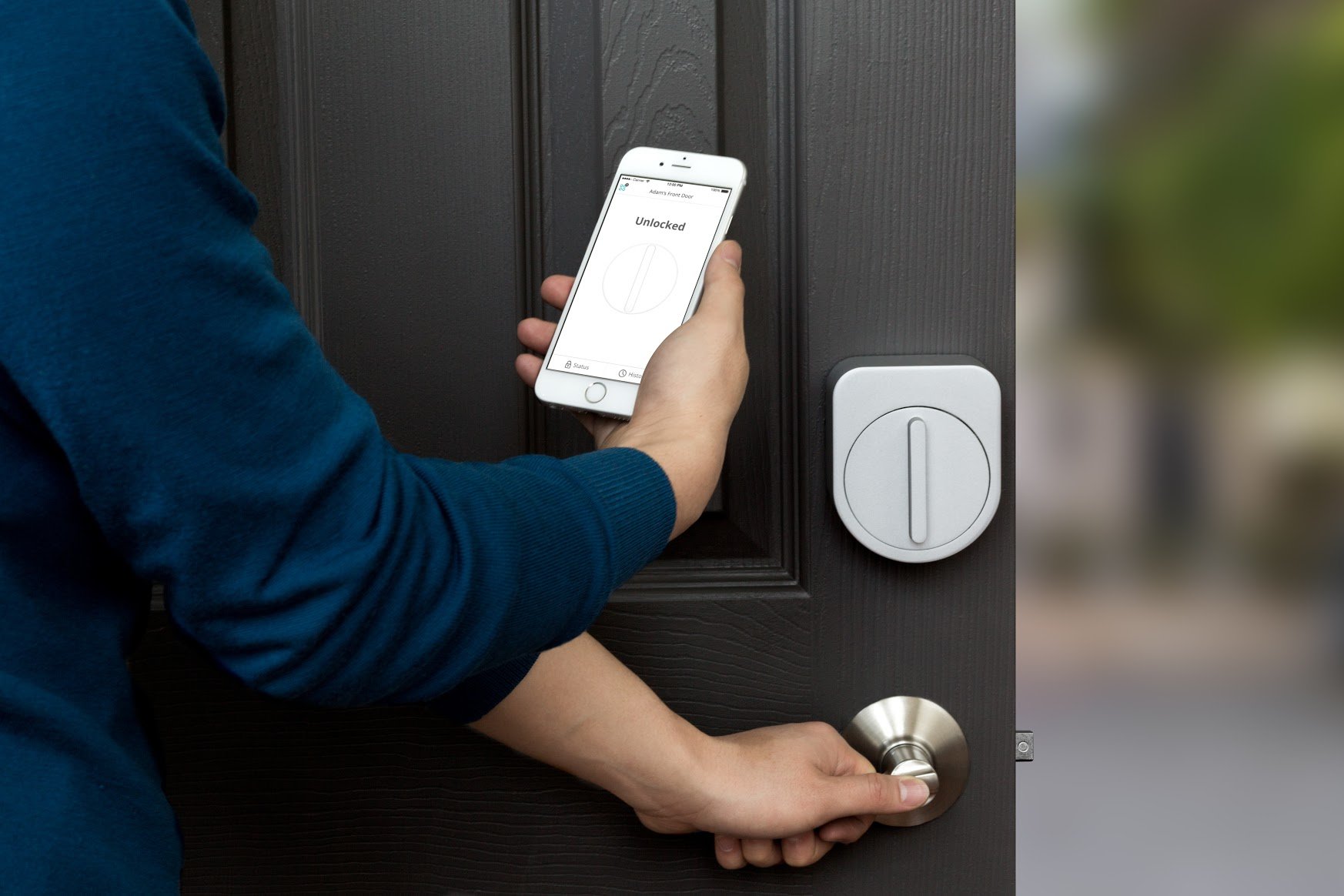 The best smart locks you can buy

The best smart locks turn your phone into a key

The lock on your front door probably isn’t the flashiest aspect of your house. In fact, you probably use it every day without paying much attention to it. These devices keep our homes protected, our families safe, and our possessions secure. Upgrading to a smart lock will give you the added convenience of keyless entry, but it shouldn’t be more of a hassle or easier to pick than an ordinary lock.

A good smart lock should be a combination of security and convenience. While the most important thing is to keep you and your house safe, these products should also be easy to install and use. Thankfully, you can easily integrate many of the smart locks on this list with other smart home products — such as Apple’s HomeKit or the Amazon Echo — and operate them via your smartphone. As a safety feature, Alexa won’t let you unlock your door with a voice, but Siri has been known to do so with an iPad that doesn’t have a passcode. That’s something to keep in mind: Convenience shouldn’t come at the expense of safety. Below are some of the best smart locks on the market, so you can bring your security into the 21st century.

Why should you buy this: This lock is sleek, secure, and easy to use

Who’s it for: Those who want no-muss, no-fuss installation and functionality

Why we picked the August Smart Lock Third Generation:

This latest iteration of the August Smart Lock has a lower cost than previous models and also boasts a new, slinkier industrial design. It fits over the interior side of your existing deadbolt and includes a traditional thumb turn to lock and unlock the door.

The lock is slimmer and taller than previous models, which works much better on doors with glaze panels. Plus, it’s made with all the high-quality materials we’ve come to expect from August. It can support Wi-Fi, HomeKit, Bluetooth, Amazon Alexa, and Z-Wave straight out of the box.

Unlike competing locks that require you to replace your existing lock, August Smart Locks install over a standard deadlock on the interior of the door. That means you can use a traditional set of keys to unlock your door or August’s beautifully-designed, easy-to-use app. Installation time takes about 15 minutes if you have the right tools in front of you and an extra set of hands to help.

Why should you buy this: This lock is extremely attractive and easy to use

Who’s it for: Those who want a sleek-looking device on their front door

How much will it cost: $249 (with network module included)

Why we picked the Yale Assure SL:

No matter how smart it is, most people won’t be excited about a new door lock. Locks are functional, utilitarian, and often bulky. But the Yale Assure SL smart lock is different. With its sleek, smooth onyx face and small footprint, this lock is a stylish device that you’ll admire every time you walk through your front door.

The lock is perfect for those seeking a simplified yet elegant looking lock that, when paired with a Network Module, works with your smart home set up. It is however, a bit expensive at $200 – that’s $250 if you buy the module and lock together.

The device comes in brushed silver, polished brass or oil-rubbed bronze and features a numeric keypad that illuminates when you press the bottom left corner. The keypad is easily visible even in bright sunlight or at night. When no one is punching numbers on the keypad, the numbers disappear, and it’s just a gleaming onyx facade.

Overall it’s an attractive lock that will make your front door better looking.

Why should you buy this: The Obsidian means you can do away with keys to your front door

Who’s it for: Those who find themselves fumbling with their keys at the front door

Why we picked the Kwikset Obsidian:

Kwikset, one of the biggest lock manufacturers in the United States, has created a sleek, modern lock with a responsive touchscreen that doesn’t require a single key. The touch screen features an LED display that illuminates when touched so that you can see it day or night. The lock itself keeps a low profile, projecting less than an inch off the door.

The lock can be set to automatically lock after 30 seconds of closing the door, meaning that you don’t have to worry about whether it’s secure. If you’re one of those people who worries about dead batteries, fear not. The Obsidian has a backup plan – literally – in the form of a compartment that stores a spare 9-volt battery just in case.

With a Home Connect feature, the Obsidian becomes a fully featured smart lock to add to its attractive looks.

Why should you buy this: This lock comes with a Wi-Fi bridge that supports several connections and includes a well-designed app

Who’s it for: Those looking for a seamlessly-integrated app that controls your lock from anywhere

Why we picked the August Pro Smart Lock Third Generation With Connect:

The August Smart Lock Pro could be one of the most advanced smart locks on the market. When bundled with the August Connect Wi-Fi Bridge, it can support HomeKit, Bluetooth, and Z-Wave Plus connections. The enhancements allow the Pro to communicate with a wealth of smart home devices (for example, switching off your thermostat when you leave for work).

The device also includes auto-unlock, smartphone control, and virtual keys. A new feature called DoorSense involves a sensor that can tell when your door is open or closed and alert you how long it’s been open. It can also tell you if someone has forced it open.

Perhaps one of the best things about the Pro, though, is the app. It’s ridiculously easy to use, with a huge button facilitating a one-tap lock or unlock of your door. It’s red when the door is locked, and green when it’s open. It’s the kind of simplicity busy households deserve.

Why should you buy this: Schlage is a 100-year-old company with a reputation for excellent hardware

Who’s it for: Those who want solid hardware with voice assistant compatibility

Why we picked the Schlage Smart Sense Deadbolt:

Schlage has been around for quite some time — well before there was such a thing as a smart lock. But Schlage has now evolved into one of the best smart lock makers in the biz. The Schlage Sense Smart Deadbolt isn’t just a great piece of old-school hardware, it’s also a device that works well with Siri, Alexa, and soon, Google Assistant.

The device works with Apple HomeKit and Amazon Alexa, where you can use your voice to lock the door. Soon, Google Assistant will also be able to access your front door. You’ll need the Schlage Sense Wi-Fi adapter in order to use the app, but there’s no monthly fee required.

You can create up to 30 unique access codes that you can program to use for a restricted time periods if you wish or with a certain person. Overall, the device is a snap to set up and a snap to use.

For the past several years, we’ve put oodles and oodles of smart locks through the gauntlet (ok, not literally) in our test homes. We test for things like ease of installation (can we do it ourselves or is a professional required?) and quality of the product overall. While having smarts is required for a smart lock, the thing we consider first and foremost is whether the device features strong hardware that will protect us. We’ll admit it, though, we’re also on the lookout for good-looking hardware. After all, who wants an ugly, clunky lock on their front door?

Next we test for functionality. Does the device work as promised? Is it easy to use? Are there any issues with connectivity? Is there a back-up for when the batteries die or the Wi-Fi goes down? After all, getting locked out of your house is a huge drag.

One final thing we look for is the smart home piece, which often comes in the form of an app. Does the app work as promised? Is it user friendly? Is it laid out nicely? Does it work with voice assistant? Can it work seamlessly with smart home hubs?

After all of that, we take a hammer and try to hack off the lock. Ok, not really, but we definitely let the locks weather the elements over time to make sure that they’re tamper-proof, waterproof, or whatever proof they claim to be.