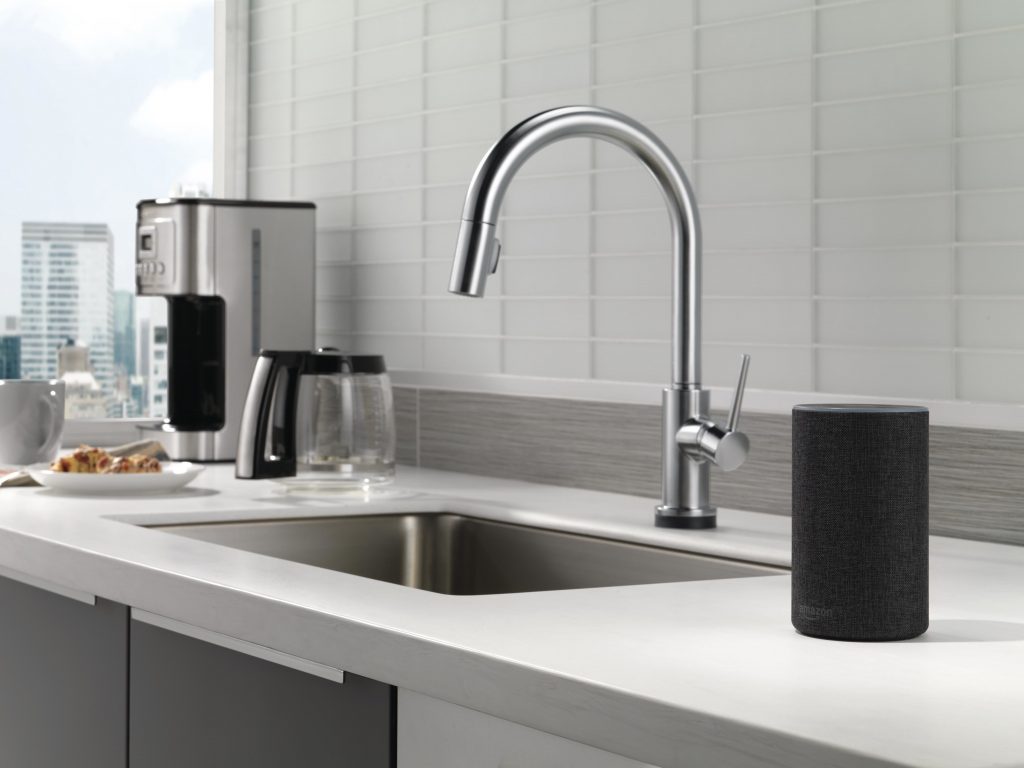 The sink in our little apartment makes a lot of weird noises but at least it doesn’t talk back to us yet. Apparently, the whole house will respond to your voice eventually if the multi-billion-dollar smart home device industry has its way. This time, kitchen appliance giant Delta is giving us the kitchen sink with a new line of kitchen faucets that will respond to voice commands.

The proprietary technology that runs this new innovation is called Delta VoiceIQ Technology, which is designed to sync up your sink with existing devices like smartphones and smart speakers enabled by Amazon’s Alexa or Google Assistant that can field your voice commands and relay them to your sink. Delta’s bet on this particular smart home scheme is based on their understanding that 20 percent of all Wi-Fi-enabled homes are equipped with a connected home device but it has been over a year since they teased the technology.

As to what Delta VoiceIQ will actually do for you in the kitchen, it sounds like it’s pretty handy for everyone from amateur chefs to busy parents trying to get kids off to school. Users can easily warm water of course, as well as turn the faucet on and off on command, saving users an action or two when preparing complicated dishes or managing the disparate needs of children and pets.

Speaking of our tiny friends, the sink will also respond to customized commands to make everyday tasks easier, such as filling a coffee pot or a watering can, a child’s sippy cup or a dog bowl. The sink will dispense in ounces, cups, pints, quarts, gallons, liters, milliliters, and also monitors kitchen faucet water usage over time.

It’s intriguing but it’s also not on the market yet. Delta expects VoiceIQ technology to appear first as a pre-assembled feature on select Delta Trinsic pull-down models starting during the summer of 2019. However, Delta is also not leaving money on the table, as it has wisely developed a retrofittable module that will enable VoiceIQ on certain kitchen faucets that have Delta Touch2O technology onboard that were manufactured after January 1. Once installed, users can set up their faucet through Delta’s online device installation site with no mobile application download required.

Delta is just putting a toe in the water when it comes to smart home technology but the company’s approach to innovation is worth noting. Delta runs something called the First Wave Innovation Lab. The lab’s mission is to dream up new concepts around faucets, showers, and related products. Delta brings the financial backing, First Wave’s small team of engineers and designers do their thing, and once products are deemed ready for release, they are launched on a large scale by one of three Delta Faucet Company brands.

The innovation lab has even had a couple of success stories already. First Wave debuted an onboard Glass Rinser last year that reached 515 percent of its goal on Indiegogo, followed by the Precision Powder Room Faucet, a 3D-printed metal faucet, and the Tap and Talk Faucet that eliminates the need for a handle. While these products were successful, others like Delta’s disastrous Wi-Fi Leak Detector, were not.