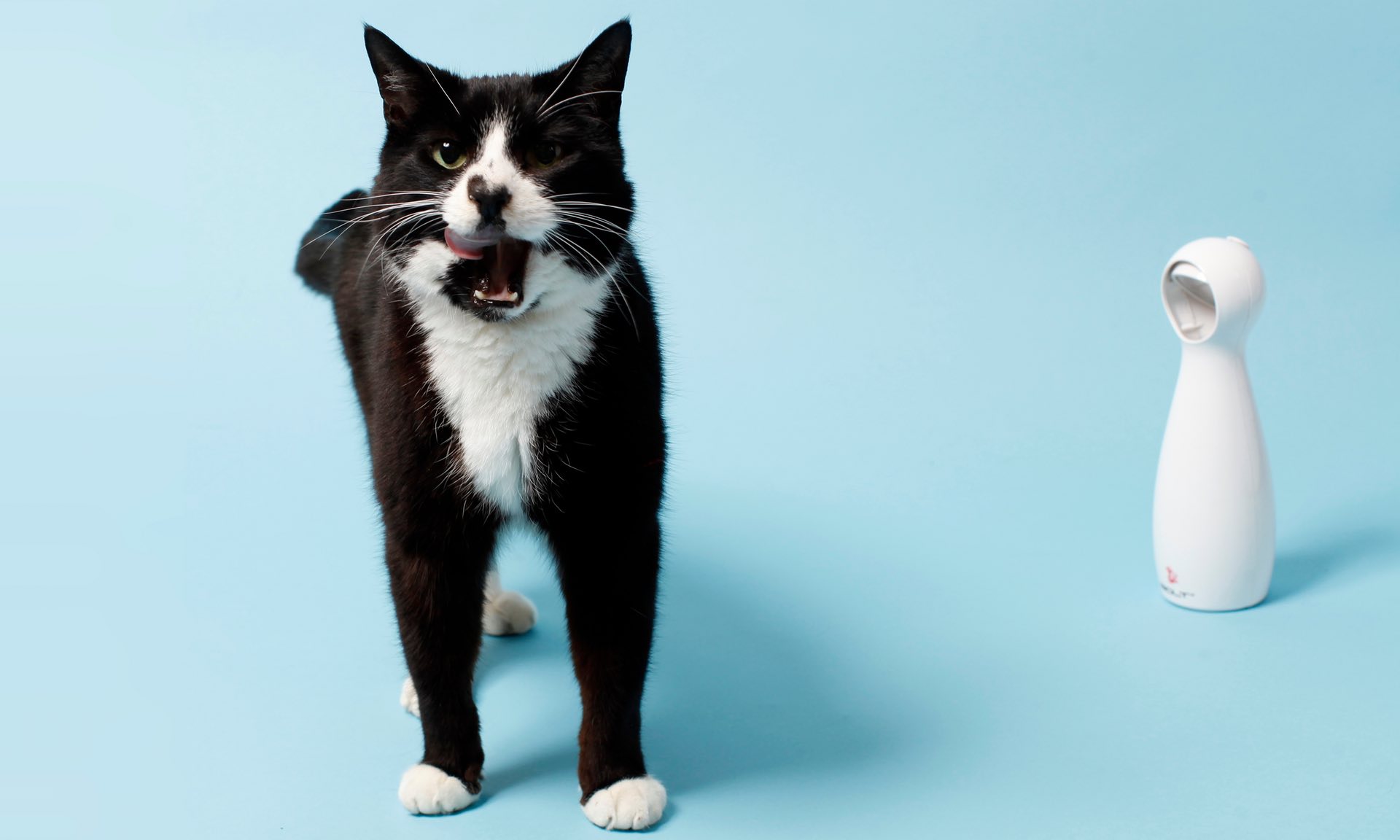 Forget clockwork mice. There’s a new range of gadgets for your cat to get its paws on, including ones to track it, feed it and even scoop up after it

Cats are relatively low-maintenance animals, though that won’t stop us from finding innovative ways to spend money on them. First they overran the internet; now they’ve come for the internet of things: the market is littered with toys, cameras, and camera-toys. Even some of the more basic items – food bowls, litter trays – apparently need a power supply now. But is this stuff really useful? Or are companies merely playing on the vulnerabilities of doting pet owners, such as myself? We tested a few gadgets with the reluctant help of my ageing cat, Toby.

Getting Toby to “frolic” seems a big ask. “He’s too old for it,” says Katherine the photographer, as I present to him the FroliCat, a laser-pointer toy that swivels and rotates atop a skittle-shaped turret. The cat is ideally meant to chase after the dancing red dot of light as it bounces off the toy’s adjustable mirror and zigzags around the room. He chose to scowl instead. Embarrassed by my reticent pet, I persist, and the red dot of light on the wall does eventually catch Toby’s eye. He very slowly extends a half-hearted paw in pursuit. Yes, younger cats might appreciate this more, but then they’ll play with anything – why not just dangle a string?

This 720p wifi video camera is designed to help you keep an eye on your pet via its cloud-based app. Its main flaw is the tendency of cats to scuttle out of frame, beyond the 300-degree panning angle. I position mine in front of Toby’s favourite sofa cushion. Every few hours, I tuned in from my office desk to watch my cat snoozing. Or, more often, an empty sofa. My favourite feature was its two-way audio communication, which allowed me to haunt Toby’s dreams by saying his name like a ghost. The stream was a bit laggy but it confused him well enough. I meanwhile had the camera send me the odd notification whenever there was a conspicuous noise or movement during the day. This is especially practical if you’re too busy for live surveillance – which you probably ought to be.

Verdict: GCHQ eat your heart out.

The 3.1in cube is a more entertaining version of the Motorola. Its “play” function activates a laser beam on the front of the camera that can be controlled remotely via smartphone, encouraging your cat to play (or, in Toby’s case, glare with contempt) while the camera rolls. The sharp resolution and a bright LED for night vision make for altogether crisper snooping.

To test this unit, I chucked Toby out of my back door in the dead of night, waited for a bit, then tracked him down again using Tabcat’s homing device. The gadget communicates via radio frequency with a small tag weaved on to the cat’s collar, which bleeps hot and cold, depending on your proximity. Fine for locating dark-coated commando cats in the undergrowth; less so if they roam further than its maximum range of 122 metres.

Verdict: For stayers, not strayers.

Self-cleaning? A dubious claim. The Petsafe uses an automatic rake that combs through the litter and dumps the dumps into a lidded compartment – not really cleaning anything. The mechanism is no more hygienic than a regular, smaller, cheaper tray.

Verdict: Not exactly thinking outside the litter box.

The SureFeed Pet Feeder may be the most useful gadget of the bunch for owners of multiple cats, a dog, or small children partial to a bowl of Whiskas. The battery-powered dispenser prevents food theft with a lid that’s triggered open by sensors which memorise your cat’s microchip. There’s something satisfying about the way the automatic door slides ajar in a smooth motion as the cat approaches, like a background prop aboard the Starship Enterprise. A decent-sized bowlful is revealed, which would last Toby about a day.

Verdict: All your cats will live long and prosper.