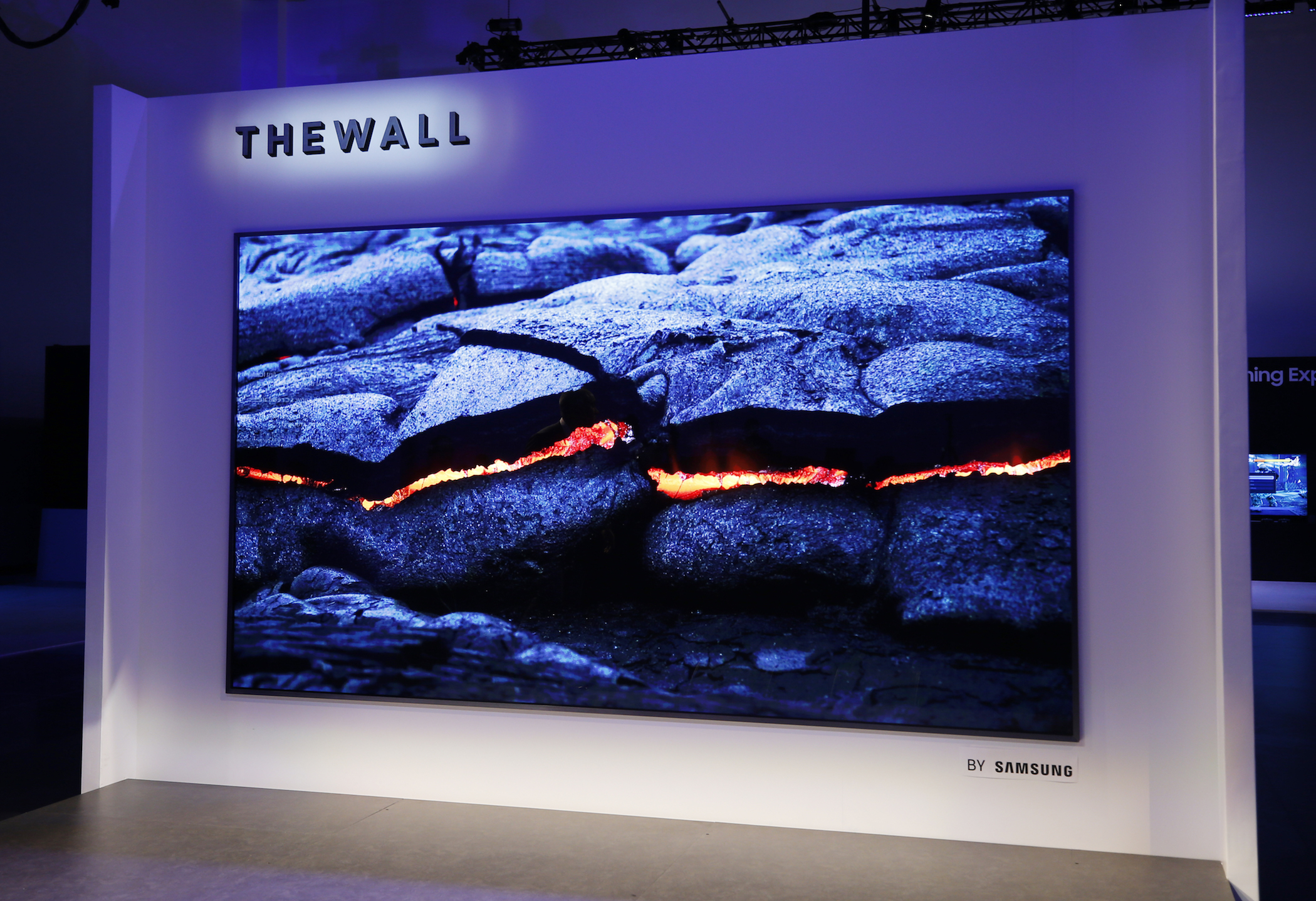 Unlike many wacky CES TV concepts, it may actually hit the market this year.

We noted when LG teased its 88-inch 8K OLED TV last week that CES is a haven for absurd, if not impressive, TV concepts. But Samsung is really taking that experimental spirit to heart. The Korean firm is showcasing a 146-inch 4K TV dubbed The Wall at the annual tech industry trade show, which formally kicked off on Monday.

Samsung touts The Wall—which is twice as big as me, a 27-year-old man—as using a “module-based” design that consists of several smaller display panels, though exactly how that will manifest itself (and how seamless this design will look) isn’t totally clear. A company representative said The Wall’s “modules can be combined to increase the size of the overall TV” and said The Wall “could be sized smaller than 146 inches.” Though the 146-inch model at CES comes in 4K, a company blog post suggests that the device isn’t restricted to a particular resolution. It can also use DCI-P3 for a wider color gamut, though a company representative declined to comment on other technical details such as HDR support and additional ports.

The Wall is a take on Samsung’s projector-replacing Cinema Screen technology. As such, it’s a MicroLED panel, which is notable for display enthusiasts. This is a still-nascent display type that, like OLED, is self-emitting, meaning each pixel doesn’t require a backlight. That means it can ostensibly produce deep black tones and infinite contrast ratios in form factors that are slimmer than the average LCD set.

But instead of using a liquid crystal layer and LED backlight like LCD TVs or the organic light-emitting material found in OLED panels, MicroLED makes up its image using an inorganic Gallium Nitride (or GaN) material and an array of millions of tiny LEDs. Samsung claims the tech allows The Wall to produce 2,000 nits of brightness, which is much higher than average. MicroLED is generally said to offer a lower response time and longer lifespan than OLED, too. The problem has been reliably producing it in TV-size screens, but Samsung is at least going for it here. Samsung says it chose a 146-inch panel to “highlight the capabilities inherent in MicroLED technology.”

Again, showing off crazy TVs at CES is nothing new—Samsung itself showcased a 170-inch display at the show just two years ago. The company appears to be a bit more serious about making The Wall a commercial product, though; it declined to detail an exact price or release date for the TV, but a Samsung representative confirmed it will hit the market “in a range of different sizes” later this year. It seems safe to say it won’t come cheap. Clearly, this is not something for the average buyer, but it should look sharp in a (wildly high-end) home theater, and as a way of moving MicroLED TVs forward, it’s nothing if not interesting.Apart from The Wall, Samsung teased a QLED 8K TV that it says uses “8K AI technology” to upscale content to the ultra-high resolution. It also said its more standard 2018 smart TVs will deploy the company’s Bixby virtual assistant and support its SmartThings smart home hub.