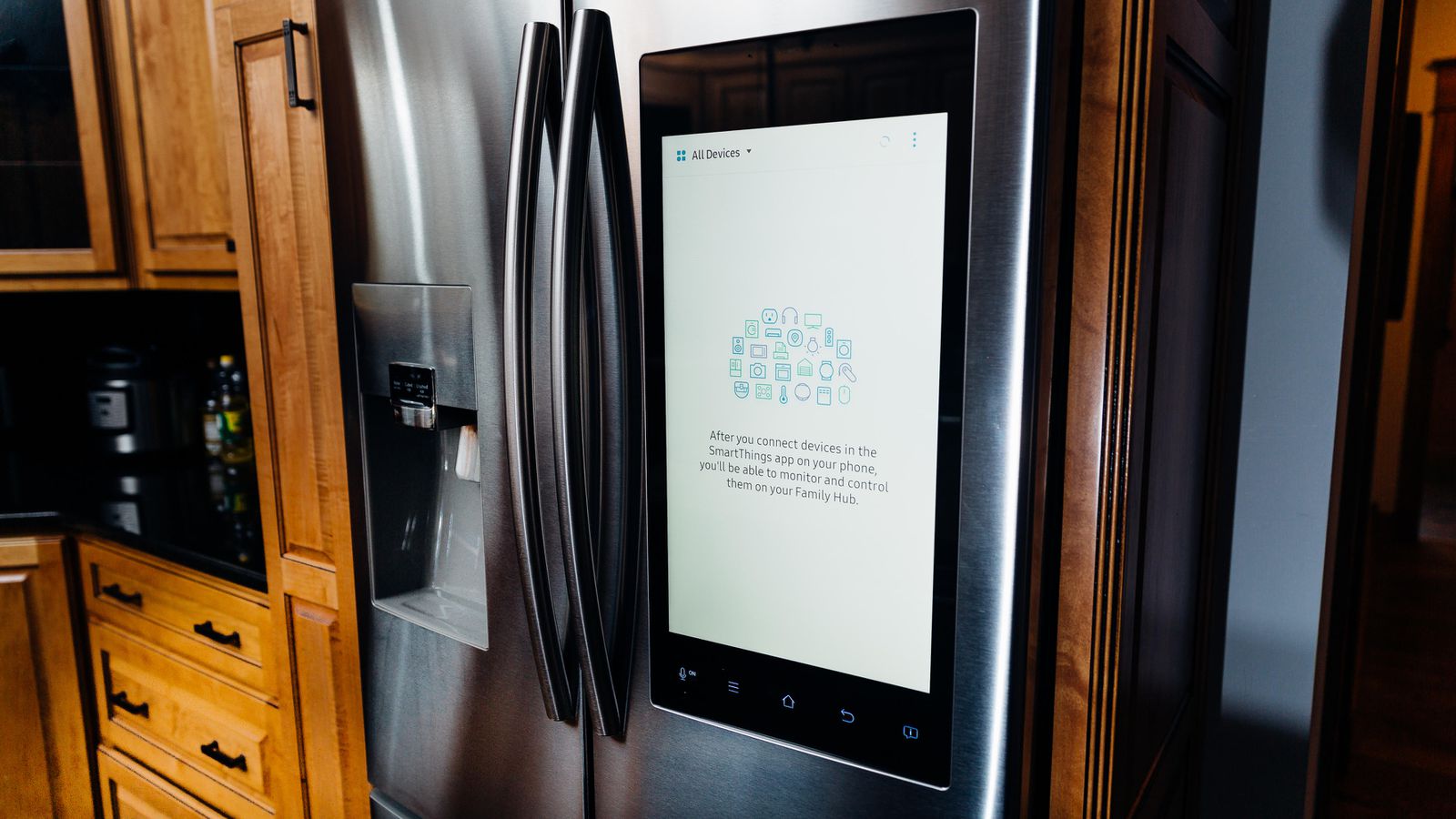 The SmartThings platform may have expanded, but Samsung’s smart home company still has a lot of kinks to work out.

Samsung’s smart home company, SmartThings, has changed a lot since it was first introduced to the world via Kickstarter back in 2012. The platform, which once consisted only of a router-tethered hub, branded sensors, third-party device partnersand an app, has since expanded to select Samsung fridges, TVs and beyond thanks to the Samsung Cloud launched last year.

Suddenly, SmartThings looks like the most comprehensive smart home platform, at least at a glance. Both Google and Amazon are rapidly expanding the number of first-party devices that work with their Alexa and Google Assistant services, but neither has their own TV or refrigerator yet, outside of products from other manufacturers. Samsung SmartThings has both of those things, as well as Bixby, its own voice assistant.

It’s been awhile since we took a close look at SmartThings, so I decided to spend some time with it — on my phone, and in the Samsung fridge and television installed in the CNET Smart Home. What is it like to have a home wholly operated by SmartThings (and Samsung) in 2019, you ask? Spoiler alert: not great. Read on to find out why.

But first, some history

Before Samsung purchased SmartThings in 2014, it was just one of many ideas launched during a crowdfunding campaign. Over $1 million in pledges later, and SmartThings successfully launched its first-gen hub backed by its new parent company, Samsung.

But there were some problems. The “universal” app, designed to bring every device together, didn’t come close to achieving its desired result.

There was also general reluctance among many consumers because hubs are, well, boring. Going into detail on the merits of multi-protocol hubs — AKA hubs that speak ZigBee, Z-Wave and other languages — will make anyone’s eyes glaze over. (I know because mine are staring to glaze over right now.)

Then Amazon announced its first Echo speaker and hubs instantly became voice control’s much less popular predecessor. Some of us at CNET question if hubs should even still be a thing.

SmartThings pressed on. There’s still a SmartThings hub (now third-gen) and an updated app. And SmartThings still has an open platform with tons of compatible third-party partners from Ecobee to Arlo, August and others.

It was almost as if no time had passed, and I don’t mean that in a good way. SmartThings gave me a lot of trouble in 2015 when I tested the second-generation hub, along with tons of SmartThings sensors and third-party devices.

But knowing how much SmartThings has grown over the years, it felt only fair to see if it had also matured into the platform I’ve always wanted it to be. Unfortunately, SmartThings was as temperamental as ever, just on a larger scale.

There are also a variety of devices installed at the CNET Smart Home that are compatible with the SmartThings platform and already paired to it on the app.

Let’s move on to the specifics of testing out SmartThings on the app, the fridge and on the TV.

I added a couple new devices to the iOS version of the SmartThings app on my iPhone 8 Plus.

There are two ways to do it — ask the app to “automatically sense” any new devices in the area or add them in manually. I set up a Philips Hue Play Light Bar and an Arlo Pro 2 security camera, but the app never successfully identified them as new devices. Instead, I opted for the manual route (since the auto-sensing didn’t work) and that performed much better.

I was able to control my Philips Hue Play Light Bar in the app, no problem, and view my Arlo Pro 2 camera’s live feed.

All that said, the app — even with the latest app version — crashed inexplicably at least four to six times during my testing. It still takes a lot of clicks and different screens to reach the settings you want and it’s easier to view the Arlo Pro 2 live feed in the Arlo app than on the SmartThings app.

The SmartThings connection on the Family Hub fridge performed significantly worse than the app. The fridge itself is a solid product with tons of apps and clever features.

Ask Bixby to show you the inside of the fridge and it pulls up a real-time view of what’s there via built-in cameras. Use that to save energy rather than opening up the fridge to see what ingredients you already have on hand for dinner — and what you still need to buy.

There’s also a calendar, optional integrations with music services like Spotify and iHeartRadio and even a Ring partnership so you can view your doorbell’s live video feed right on your fridge.

SmartThings was another story. I connected the exact same SmartThings account on my app to the fridge. Instead of getting a list of all of the connected devices like the Play Light Bar and the Pro 2 camera, I got… crickets. It didn’t list a single device.

The fridge’s giant built-in LCD screen instead said, “After you connect devices in the SmartThings app on your phone, you’ll be able to monitor and control them on your Family Hub.” Hrm.

I triple-checked the software on the phone and on the fridge to make sure everything was up-to-date, logged in and out and continued to get this message. Unsurprisingly, when I asked Bixby on the Family Hub to pull up the “rear camera” — that’s the name of my Arlo Pro 2 security camera — it couldn’t.

The Q6 Series TV fortunately worked better than the fridge. Login via the SmartThings app on the TVs home screen and use the Samsung TV remote to scroll through — and control — your SmartThings devices. I was able to turn my Philips Hue light bar on and view my Arlo Pro 2 camera.

It was nice to view the Pro 2 feed on a larger screen, but any time I wanted to adjust a setting or really do anything beyond the most basic device controls, I instinctively reached for my phone. The phone app has its own issues, as I discussed above, but it’s still simpler than trying to use a TV remote to painstakingly enter in passwords one character at a time and complete advanced automations.

Annoyingly, my SmartThings devices didn’t always show up when I opened the TV app. I’d log out and back in and they’d usually appear, but once or twice I had to log out twice before they loaded.

The neatest TV feature allowed me to mirror what I was watching on the fridge. Simply pull up YouTube or Netflix on a (compatible) Samsung TV and use the mirroring function on the fridge display to watch the same thing. This worked pretty well, but the connection between the TV and the fridge occasionally cut out for no apparent reason. The Q6 would disconnect from the fridge and I’d have to go through the process of connecting them all over again.

While SmartThings has clearly grown up, I still wouldn’t recommend it as a whole-home setup today. I experienced similar glitches in 2015 as I did testing the updated system in 2019. The app crashes, for instance, shouldn’t still be happening.

There were plenty of other glitches that gave me pause, too.

There’s also a question of value. If you want SmartThings in your home today in a major way, you’ll have to dish out thousands of dollars for a Samsung fridge and TV — and that doesn’t include the other investments in third-party devices like lights and cameras.

Relatedly, even if the fridge integration had worked better, I wouldn’t ever think to head over to the fridge to turn on a light or adjust my SmartThings settings.

The idea of the fridge as the “hub of the home” makes sense in many ways — I particularly enjoyed the TV mirroring feature, but I don’t want (or need) my fridge to be an access point with all of my smart home devices. I do like the idea of being able to view a security camera feed on the fridge, but, again, that specific SmartThings integration didn’t work for me.

That feeling isn’t specific to Samsung, SmartThings or Bixby. I wouldn’t want an Alexa-, Google Assistant- or Siri-platform-enabled LCD fridge display either. Voice sans screens is the simplest way for a whole family to interact with smart home devices — no phone, no fridge, no TV needed.

I don’t think so. Alexa, Google Assistant and Siri have managed fine without dedicated platform hubs. Of course, the Amazon Echo Plus, Apple’s HomePod smart speaker and the Apple TV perform some hub-like functions, but Amazon sells plenty of non-hub smart speakers.

All of this speaks to the diminished role of hubs in homes — I feel similarly about Wink. Samsung’s clunky execution of SmartThings hasn’t helped things either.

I’m also keeping an eye on Family Hub 4.0. Scheduled to launch in April, Family Hub 4.0 will include Bixby Vision and updates to Bixby’s voice processing capabilities. Bixby Vision is supposed to auto-detect and label certain foods so you don’t have to. The voice assistant updates should make it easier to use natural language when making requests like “show me recipes with tuna.”

This certainly sounds like it could make Bixby better, but that won’t mean much if I can’t manage to connect my SmartThings devices to the fridge. We’ll see.