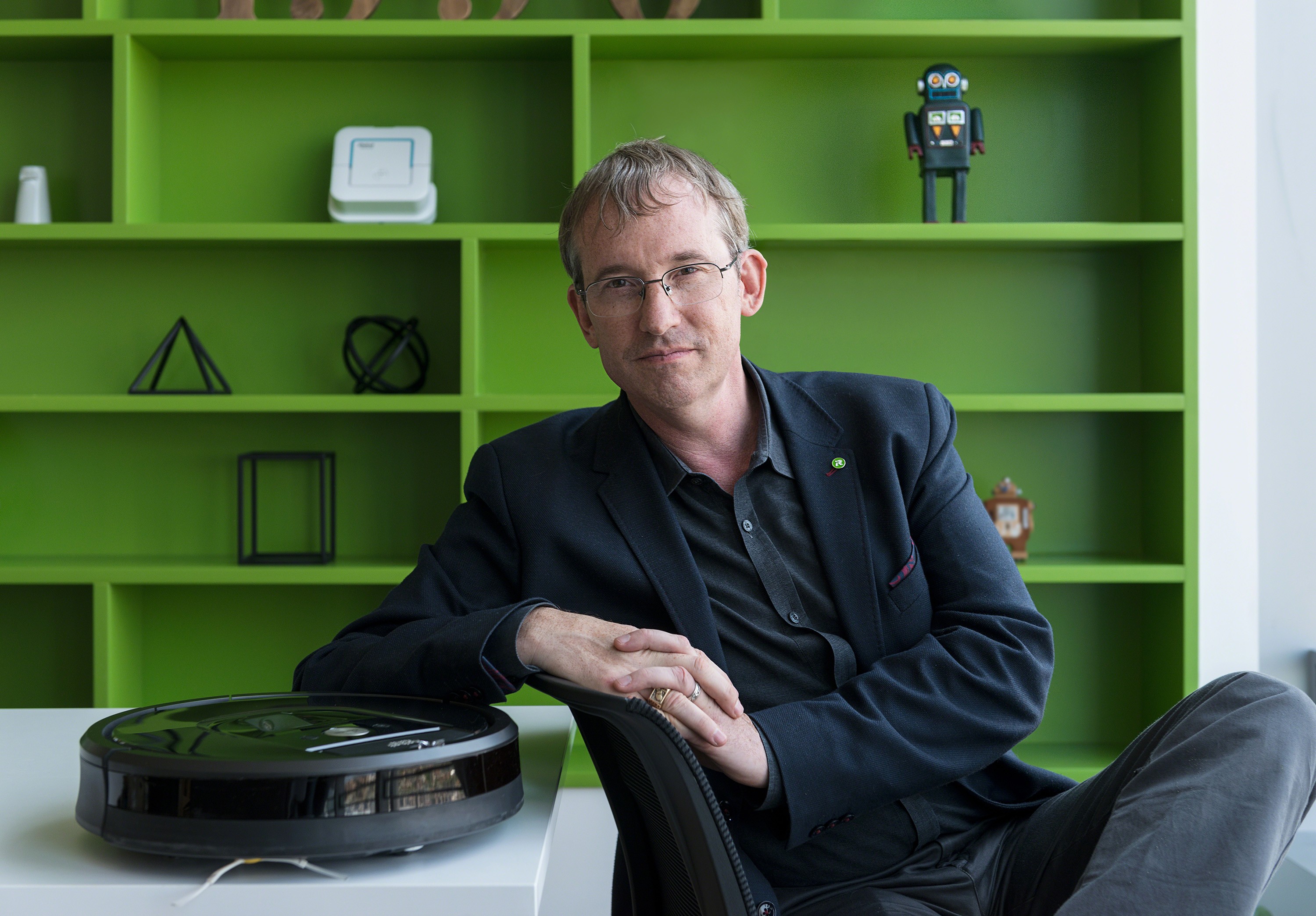 Roomba to Rule the Smart Home

Smart homes are one of those technology ideas that never seem to catch on, despite the efforts of technology heavyweights like Amazon and Google parent Alphabet. Could Roomba, the popular robotic vacuum cleaner, be the missing link that finally makes home automation useful and convenient?

That’s what Roomba maker iRobot claims. The key technology isn’t the device’s dirt-sucking aptitude, but its ability to create navigational maps of people’s homes through an onboard camera, sensors, and software. The company added the feature to its more expensive models in 2015 so the robots could clean more efficiently, and it has been refined since. Soon Roombas will be able to recognize which rooms they’re in and identify large objects located in those rooms, says iRobot CEO Colin Angle. That “spatial understanding” will transform smart homes from “a frustrating morass of fractured devices” into cohesive systems that automatically adjust to fit their owners’ preferences, he says. Angle spoke to MIT Technology Review about his smart-home concept, the types of robots iRobot might release next, and how the company will handle concerns about user privacy.

How do you think an intelligent home should work?

What we’re seeing today is a collection of devices that are all controlled by their own apps. The promise of enhanced utility is actually being reduced by the complexity we’re introducing. A successful smart home should be built on the idea that nobody programs anything; the basic services in your home would just work. So you would walk up to your front door, which would unlock if you were authorized to enter. You would go in and the light would turn on, the temperature would adjust, and if you started watching TV and moved to another room, the TV show would follow you. When you’re no longer using various services, they could shut down automatically to save energy, or be set to respond to the weather or the time of day.

That might sound like an idealized vision of a smart home, but it’s completely reasonable to do if you have a robot in the mix that is actively going out and discovering what rooms exist and what the different devices in them are, and you have a way of figuring out what room people are in.

How much of this technology would iRobot provide?

The dizzying variety of devices and tasks that exist in people’s homes means we can’t do it all; that would be a ridiculous notion. If you wanted, for example, a robot that could interact with you personally and go and look whether you left your car keys on a table, you’d need a camera situated at human head height. Maybe that would be a butler type of robot. It wouldn’t be a Roomba, because making a Roomba bigger would make it a worse vacuum cleaner. The role we’re most passionate about playing, and that we think we’re uniquely positioned to play, is organizing the spatial information in the home.

How would all these technologies communicate with each other?

Roomba or Braava [iRobot’s mopping robot] would be the explorer—the device that helps build and maintain the spatial understanding of the home in addition to its primary function of cleaning floors. Robots and other devices in the smart home need to understand the environment so they can figure out what they should do. What’s the point of being able to understand the sentence “Go to the kitchen and get me a beer” if the robot doesn’t know where the kitchen is? You could also have smart thermostats, lights, blinds, door locks, humidity sensors, TVs, radios, and speakers that sit in this ecosystem. Those would be the building blocks of the smart home. The unifying intelligence [that ties everything together] and is what enables the home to be smart could come from iRobot or a different company.

Which device do you think will be the technology hub for smart homes?

Tell us in the comments.

So if you bought a Roomba, own a smartphone, and have some number of connected devices, the Roomba could build a map of your home, place your devices within the map, and share that information with other devices. Then the ecosystem could give you a choice of preferences based on [the included devices], and have the room start behaving [intelligently]. And if you didn’t like how it behaved, you could change your preferences and the system would learn. Your Amazon Alexa devices and Google Home devices could also supplement that behavior by providing a voice interface to the system and extend your smart home’s reach to things that they’re connected to.

When can I have such a smart home?

This is more of a five-year vision than a 10-year one. The [high-end] Roombas on the market today can show you a map of what they did every day if you allow the robot to serve that information up to you. That’s the first commercialized step toward the vision I described. You’ll see the rest over the next couple of years.

Are you planning to partner with companies like Google and Amazon that already have a presence in the home?

This is a very active idea; it’s not a “Gee, I hope I get someone’s attention someday” idea. I’ve spoken at a number of Google events recently, and I know [Amazon CEO] Jeff [Bezos] and [Google CEO] Larry [Page]. The community of robot enthusiasts is a friendly group of folks who share a passion and are trying to figure out how this is all going to work together.

You spend nearly $100 million at iRobot on R&D annually. Is all that going toward making this smart-home concept a reality?

Yes, in the sense that we’re investing in mapping and navigation technology and new products. We’ve talked about lawn mowing, laundry folding, loading and emptying dishwashers, and bathroom cleaning as things of interest to us, because they’re all tasks you have to do every day or every couple of days or else your living environment suffers. Robots will eventually handle all of this routine home maintenance; it’s just a question of when.

We’re also very interested in how to extend people’s ability to live independently at home. The aging of society is creating a demand that’s a big consumer need and business opportunity. We did a project a couple of years ago where we developed robotic technology that allowed doctors to diagnose patients in a hospital at a distance. We learned a ton of things that would help us if we ever wanted to bring that capability to the home.

iRobot attracted a lot of attention in July because people thought you were selling Roomba mapping data. After the outcry, you pledged not to sell customer data and said you wouldn’t use mapping information for smart-home applications without explicit user consent. Does that privacy stance affect what you can do to enable smart homes?

Of course it curtails things [related to business collaborations], but it’s necessary at a fundamental level. [Previously], we might have considered giving permission to companies to use our data in ways that [people might object to, but] in order to make the smart home work, we’re going to need to be a trusted partner with homeowners. That applies to even really simple knowledge of what rooms are what and where things are.