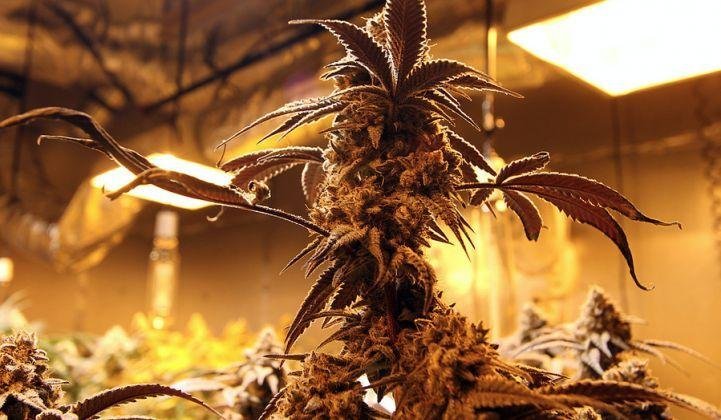 Greenhouses are being wired up to the internet of things in order to save cash.

More U.S. cannabis cultivators are deploying internet-of-things (IOT) technologies in greenhouses to optimize the use of power, water and nutrients.

As competition ramps up between growers in states where cannabis has been legalized, he said, “there’s real pressure to optimize or die. It’s all about maximizing the yield per strain, based on whatever inputs are coming in.”

Tech-savvy growers are now building greenhouses with sensors to track variables such as heat and humidity, he said. These are used to assess growing conditions throughout the facility and to minimize wastage of raw materials such as energy and water.

The level of environmental control is on a par with the most advanced building management systems found in the commercial and industrial power sector, Guiterman said.

Furthermore, growers are eschewing traditional heating, ventilation and air conditioning automation systems in favor of IOT-based setups because the latter are cheaper and easier to install, he said.

“You have a legal emerging market that’s very intensive in its use of inputs, whether that’s energy or nutrients, and there are brand-new businesses sprouting up to support and help that industry,” he said. “They are using the internet of things as the backbone of their business.”

Energy use is just one of many variables that growers are looking to control, he said. Although some cultivators are considering custom-built microgrids to cut energy bills, in most cases they have scant margin for capital expenditure on energy-related infrastructure.

“There’s not enough certainty in the individual business models to know that you would want to reinvest in certain equipment,” Guiterman noted.

In some cases, they may not need to. Guiterman said there could be an increasing appetite among utilities to co-opt growers into demand response programs. Already, some states are moving to cap cannabis cultivation energy use.

In March, for example, Massachusetts published cannabis regulations stipulating that large-scale cultivation covering areas of more than 5,000 square feet should have a maximum lighting power density of 36 watts per square foot.

The state’s Department of Energy Resources noted Massachusetts has a commitment to cut carbon emissions to 80 percent below 1990 levels by 2050, yet the high-intensity grow lights in a marijuana facility are “more intense than any other commercial or industrial use.”

Cannabis plantations could be well-suited to demand response programs because the crops are not sensitive to brief interruptions in power, Guiterman said. To date, though, utilities have been slow in engaging with growers, he said.

That could change not just because of the expansion of the legal cannabis production, but also as a result of a boom in indoor agriculture in general.

Speaking on GTM’s Interchange podcast last month, Shayle Kann, senior vice president of research and strategy at Energy Impact Partners, said: “Indoor agriculture has the potential to deliver a lot of new energy consumption, and a pretty unique profile in terms of load.”

Harnessing this load could be valuable to the grid, he said. Energy Impact Partners, which is backed by a coalition of 14 utilities, is eyeing the indoor agriculture space with a view to striking deals, he revealed.

“Indoor agriculture is potentially an area of huge load growth for utilities,” Kann said. “It’s probably second to transportation in terms of potential for new load over the next 30 years.”

There is a clear role for utilities in supporting the growth of indoor agriculture and making sure the grid benefits as a result, he said.

Also on the podcast, Logan Ashcraft, a San Francisco indoor agriculture expert, said: “The energy load for a plant factory varies a lot. If we’re talking about leafy greens, assuming the growing lights are on for 18 hours and off for six hours, we estimate anywhere between 10 and 18 megawatts.”

Listen to the podcast episode on plant factories below. Subscribe to The Interchange on Apple Podcasts, Google Podcasts, Stitcher, Spotify or anywhere else you get your podcasts.