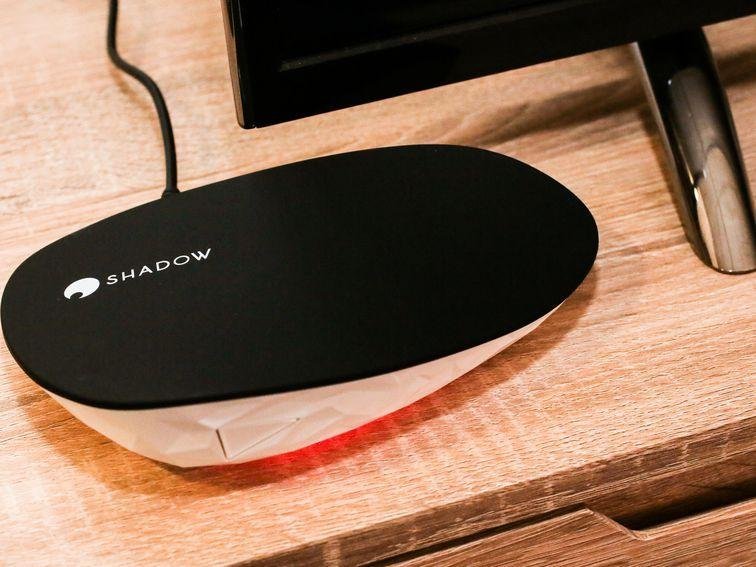 This small, stylish box for its cloud service offers device and network connections for a PC-free Windows gaming setup.

Blade’s Shadow Ghost is a cool little box that lets you use the Shadow desktop-in-the-cloud service with just a TV or monitor. No PC required.

The box that gives you the device and network connections you need to use the Windows-based desktop service. When I tried it out, I kept forgetting I wasn’t on a local PC and never found myself shrieking about the speed. I still can’t believe I like it so much.

A “Shadow,” as Blade dubs the virtual system the service provides, can be used for anything, but the most obvious mainstream allure of a virtual machine these days is for cloud gaming. Think of the Ghost as a console without any local storage and simple video decoding that can run any Windows game. This is actually the second version of the box, but now it’s got a catchy name and most of the kinks worked out.

Like many competitors, the service is essentially a Windows virtual machine (VM) running on a Windows server within a datacenter; in my case, the server is running a 3.2GHz Xeon E5-2667 V3 with 12GB RAM and a Quadro P5000 with 16GB GDDR5X. It’s not cutting-edge gaming performance, but it is roughly in the same league as the GTX 1070 max-Q laptops we’ve seen recently. Overall performance will depend on the game and your quality settings.

But unlike almost every other cloud gaming system I’ve seen, it runs well in 1440p and, depending upon the game, even 2160p. And it feels more baked now than it did when we tried it in its early US rollout. It’s probably the slickest, too, for a VM. (Gaming-only services such as GeForce Now are obviously more streamlined.)

Though it publicly specs frame-rates of 4K at 60 frames per second (which matches most 60Hz displays and TVs and thus shows fewer artifacts) and 1080p at 144fps, it also does 1440p at 75fps, which is a solid happy medium for a lot of games. The alternative resolutions are also a perk that many competitors don’t supply, as most are limited to 1080p.

The Ghost box connects to a display via HDMI. It has four USB Type-A ports, a headphone jack and an AC adapter input. You connect via gigabit Ethernet or 802.11ac Wi-Fi (aka Wi-Fi 5). The overall fit and finish is good — for a device that feels like it’s 3D printed.

It’s easy to set up and compact enough to tote from one place to another. Windows recognizes USB devices such as keyboards, mice and an HP Omen Mindframe headset as if they were running locally. (Note that I didn’t test chat or streaming functions.)

There’s one big problem with the Shadow: Its 256GB Windows partition isn’t nearly big enough. You’ll need a USB hard drive to swap game installations. I’d like to see the company either increase the base configuration or introduce a tier of service with more space.

The Shadow can also connect to wireless input devices via Bluetooth. The connection isn’t really through Windows, though, just through the box itself. It doesn’t work while the VM’s open, so it’s not as convenient as it could be.

Performance on the Shadow side is one thing, but your connection to the internet is another. It doesn’t handle latency problems gracefully — that’s when your internet connection sends data packets erratically and is a bigger issue than bandwidth for most people, since it can vary so much from moment to moment. It’s hard to diagnose if your network’s at fault, because (obviously) you can’t launch offline or in safe mode, among other things. And it requires a mouse and keyboard to start up, so disconnecting them to diagnose any USB connection issues isn’t an option.

There’s a control panel application that displays network statistics and lets you select some basic options. In the US, Blade owns its own servers in data centers around the country (called “co-location”), and it’s newer to the US than Europe. At the moment, you can’t pick which data center to access; it’s all automatic.

The Shadow suffers the same problems as every cloud gaming system I’ve tried, most notably a compressed tonal range. No matter how good your bandwidth is, the bitrate is never high enough that it doesn’t have to compress the video signal, which can result in flatter colors. Some people may not even notice, or they’ll notice it less once they’re immersed in gameplay.

Aside from selecting the option to automate Windows updates, the rest is in your hands, such as Nvidia driver updates. Restarting during driver updates can be a bit wonky, since that tends to close the Shadow on the first reboot. But it keeps running in the cloud for 90 minutes, which means it’s really easy to launch right back into what you were doing.

And when you’re not gaming? I’ve been using it as my primary work system, attached to a monitor. So far it hasn’t groaned once under the weight of several browsers’ worth of tabs or anything else I’ve thrown at it.