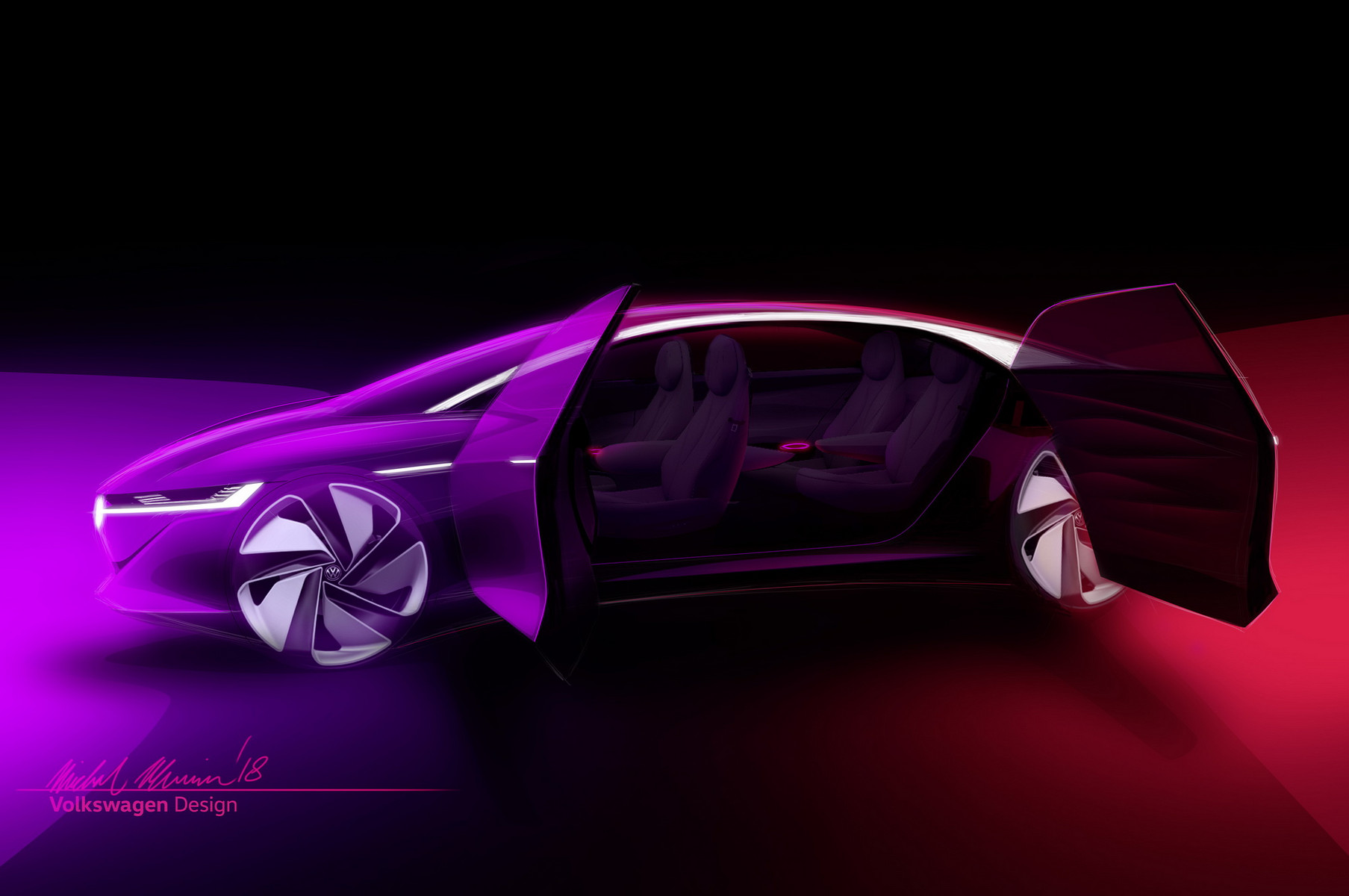 The I.D. Vizzion will be unveiled at the Geneva Motor Show

Volkswagen is adding a fourth car to its futuristic I.D. lineup of concepts, and it will show it off in full at the upcoming Geneva Motor Show. Called the I.D. Vizzion, it’s a long, low sedan with no steering wheel or pedals, and it’s meant to exhibit how the company is thinking of a future where we all routinely step into a fully electric autonomous car that does the work for us.

It’s also part of Volkswagen Group’s — VW’s parent company — pledge to add electric motors to its entire lineup by 2030. VW alone plans to introduce 20 electrified cars by 2025. The aggressive push, worth some $40 billion, was kickstarted after Volkswagen Group was caught cheating diesel emissions tests in a massive scandal now referred to as dieselgate.

Much like the other I.D. concepts — the Buzz bus, the Crozz crossover, and the original I.D.— the Vizzion will be relatively powerful and quick. A 111kWh battery pack will help the car last for up to 665 kilometers (413 miles) on a single charge, according to VW. Equipped with dual electric motors, the car has a total power output of 225 kW (roughly 302 horsepower) and a top speed of 180 kilometers per hour (112 mph).

But, of course, the “driver” of the I.D. Vizzion will be freed from the need to pay attention to the road, and so the importance of the performance specs is debatable. Instead, the driver will be able to join the passengers in enjoying the ride. They’ll be able to interact with the car’s “virtual host,” which can be done either by voice or gesture control. VW says this digital assistant will know “the personal preferences of the vehicle guests” — that’s my favorite new way to refer to passengers; can’t wait to use it myself someday — in a way that allows it to adapt the car’s “digital ecosystem” to each of them.

What does that mean? It’s hard to say without more specifics, but it sounds an awful lot like the ideas proposed by some electric car startups, like what Byton showed off at this year’s Consumer Electronics Show. Like that car, the I.D. Vizzion sounds like could let each vehicle guest (there it is!) zone out to their own preferred entertainment, all while having the car dial in the perfect seat position, climate controls, and other preferences.

This is a good time to point out the weird, low tension currently simmering in the auto industry when it comes to the design of fully self-driving cars. Some of the fanciest concepts from a few years ago imagined radical ideas, like turning the inside of a car into a workspace or making it easy for everyone to face each other and be social. To be sure, we’re still getting plenty of that in some of the concepts we see today.

We have also seen a lot of fully self-driving concepts that look just like normal cars without pedals and a steering wheel (like, most recently, GM’s fully autonomous Chevy Bolt). This could be a choice to keep things familiar to drive acceptance of self-driving cars or a cost-saving measure, or both. Either way, it seems we’re in full “throw all the spaghetti at the wall” mode when it comes to imagining what a fully self-driving car should look like.

With no manual driving controls, VW says a “digital chauffeur” will pilot the I.D. Vizzion. The company has not said which self-driving technology this refers to, though. Volkswagen Group is working on some self-driving technologies of its own through some of its sub-brands like Audi. It also recently struck a deal with Aurora Innovations, a startup founded by former Google self-driving guru Chris Urmson. But two companies have only spoken about using Aurora’s tech to power Sedric, VW’s first fully autonomous vehicle concept, which is less like a car and more like an autonomous pod.

Here’s what Johann Jungwirth, VW’s chief digital officer, said when I spoke to him about the Aurora announcement:

The primary focus right now of this partnership is the Sedric family of urban pods, urban shuttles, and so on, and other vehicles specifically designed and purpose built for mobility as a service. [That’s] not to be mixed up with the rest of the 360 models of vehicles our brands have in their portfolio, now and with next generations.

What will power the I.D. Vizzion? What sorts of in-car entertainment experiences can we expect? Why is VW obsessed with the letter z? We’ll hopefully get some answers in Geneva in a few weeks.