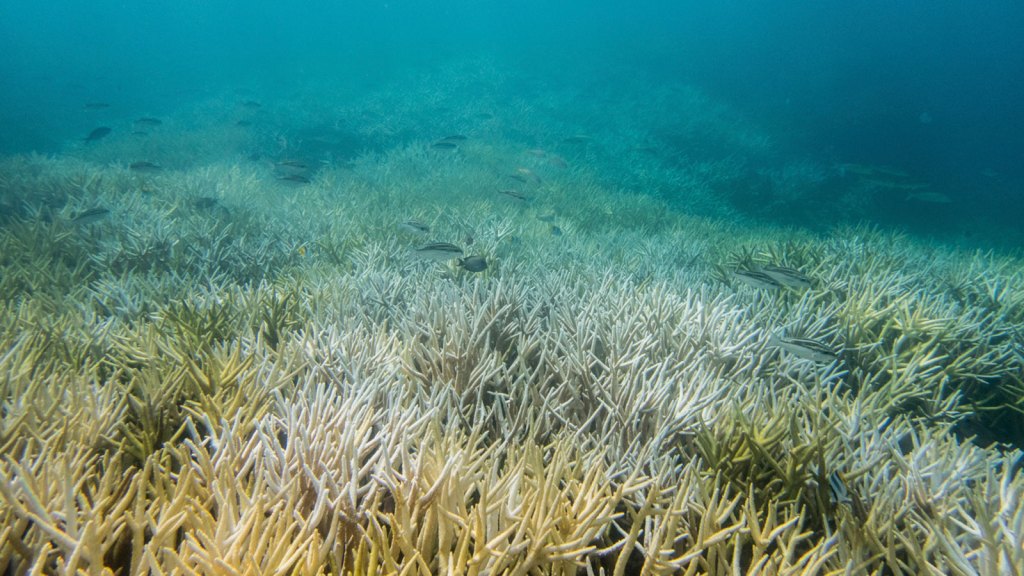 To save our oceans, we have to change what we do on land

For decades, oceans have served as the planet’s carbon garbage dump, soaking up 90 percent of the excess atmospheric heat generated since 1970 and a third of our greenhouse gas emissions. Now the 71 percent of the Earth that makes life on land possible has reached a frightening tipping point that threatens human existence, according to a landmark report issued Wednesday by the United Nations-supported Intergovernmental Panel on Climate Change, or IPCC.

The findings suggest severe consequences for both humanity and nature, according to Ko Barrett, the panel’s vice chair, who spoke at a press briefing on Tuesday. “This report highlights the urgency of timely, ambitious, coordinated and enduring action,” said Barrett, who is also the deputy assistant administrator of oceanic and atmospheric research at the U.S. National Oceanic and Atmospheric Administration. “What’s at stake is the health of ecosystems, wildlife, and importantly, the world we leave our children.”

Even if greenhouse gas emissions magically ceased today, so much heat is already baked into marine ecosystems that the ocean would continue to warm, sea levels would keep rising, and acidification and deoxygenation would persist for decades to come, noted Nate Bindoff, a report author and oceanographer at Australia’s University of Tasmania.

The report comes as the ocean faces growing threats from overfishing, plastic pollution, and seabed mining. It also arrives at a moment when — despite lackluster global efforts to reduce carbon emissions — innovative new approaches are emerging to combat the effects of climate change in the oceans. And much of that work could be done on land.

The key findings are alarming: Ocean warming has doubled since 1993. The frequency of marine heat waves, which are devastating the world’s coral reefs, have doubled since 1982 and are intensifying. Reefs remain at high risk of extinction even if global temperature rise is kept to 1.5 degrees Celsius above pre-industrial levels, as called for by the Paris climate accord. Extreme flooding of coastal areas will likely occur at least yearly by 2050. Fish populations face collapse thanks to a combination of ocean acidification, loss of oxygen, and warming of the ocean’s surface, which blocks the flow of nutrients to and from the deep sea.

Alas, there’s more: Sea levels will continue to rise as the melting of the Greenland and Antarctic ice sheets accelerates throughout this century. If emissions are kept in check, sea levels could rise by an estimated 1 meter (3 feet) by 2300. But if carbon emissions climb unrestrained, sea levels could increase by several meters – without factoring in the potential collapse of Antarctic ice sheets.

Meanwhile, the Southern Ocean is heating up fast and accounted for as much as 62 percent of global ocean temperature rise between 2005 and 2017. That’s more bad news for small Pacific island nations that already contend with rising oceans, dwindling fishing stocks, and more frequent and intense tropical cyclones. Add to all this: Widespread thawing of permafrost could release tens to hundreds of billions of tons of carbon and methane into the atmosphere.

It’s harder to imagine a more clear alarm. But efforts are already underway to start to address the scope of this looming crisis.

A group of leading coral scientists in Australia, for instance, thinks the key to helping the battered Great Barrier Reef is tying its survival to the preservation of ecosystems on land, such as the 425,000-square-kilometer (164,000-square-mile) catchment on the northeastern part of the continent, which drains to the world’s largest reef system.

The researchers wrote a commentary published last week in Nature in which they suggest alternative uses for $14 million that Australian policymakers give to “local-scale approaches” for reef restoration, like coral gardening. Instead, they recommend the country ditch coal for renewable energy, move aquaculture — such as seafood farming — to land to prevent a buildup of antibiotics and animal waste in the ocean, and tend to wetland areas and coastal vegetation, like mangroves.

“All of these actions would simultaneously reduce emissions, capture carbon, curb agricultural runoff onto coastal reefs and enhance people’s livelihoods and food security,” the scientists wrote. “Thus, the benefits would extend far beyond the preservation of coral reefs.”

After unprecedented back-to-back marine heat waves in 2016 and 2017 killed off half the Great Barrier Reef’s corals, a slew of solutions were proposed, from dispatching robots to disperse coral larvae and genetically engineering hardier coral strains to deploying underwater fans and overhead sun screens to shield the remaining reefs.

“All these good intentions have been a bit misguided,” said Tiffany Morrison, a professor at the ARC Center for Coral Reef Studies at James Cook University in Queensland, Australia, and the lead author of the Nature commentary. “We actually need to take a much more sensible, in fact, common-sense approach really to deal with these issues.”

That strategy would require new governance structures to manage the catchment for the benefit of terrestrial and marine ecosystems – a tall order given that both of Australia’s major political parties have supported the expansion of coal mines near the Great Barrier Reef.

Still, Morrison pointed out, the “ecological grief” experienced by people over the probable demise of one of the world’s greatest natural wonders has created “a social and political mandate in a way there wasn’t even five years ago.”

Scientists and climate advocates are greeting the findings of the new IPCC report by doubling down on many of the messages they’ve offered since the series of increasingly alarming reports began last October. Getting a handle on slowing the effects detailed in the report obviously starts with slowing carbon emissions, but there are also renewed calls for international banks to finance massive changes in global transportation, as well as scientists cajoling their colleagues to speak out clearly on what the data says.

Oceanographer Francisco Chavez was part of a team that discovered a link between terrestrial and ocean health when they found that carbon emissions from Silicon Valley and the adjacent Salinas Valley were being blown over a mountain pass and acidifying the nearshore waters of the ecologically rich Monterey Bay.

Data collected by sensor arrays deployed in the bay suggests that around 20 percent of the carbon absorbed near the shore originated regionally, “indicating a potentially large impact on ocean acidification in productive coastal waters,” said a study Chavez coauthored in March.

“Cleaning up local air pollution will help on a wide variety of fronts, including improving human health and ocean health,” said Chavez, a senior scientist at the Monterey Bay Aquarium Research Institute in California. “It can be sold on a wider basis than just reducing coastal acidification.”

For Torsten Thiele, founder of the Global Oceans Trust, the ocean climate crisis detailed in the IPCC report demands the creation of international institutions like those built in the 1940s to fund reconstruction of areas devastated during World War II.

Thiele has advocated for the establishment of an Ocean Sustainability Bank as a public-private partnership to finance large-scale projects to reduce, say, carbon emissions from the global shipping industry or to monetize the restoration of mangroves to sequester carbon and protect shorelines. “Finance is a key tool,” Thiele said.

Morrison of James Cook University expects the IPCC report to further galvanize marine scientists to speak out — a development she welcomes. She firmly believes the research community should pressure governments to take action.

“There has been a culture within science that you can’t have an opinion on anything because you’re supposed to be objective or you’ll lose funding,” she told Grist. “This is more important than anyone’s individual career.”