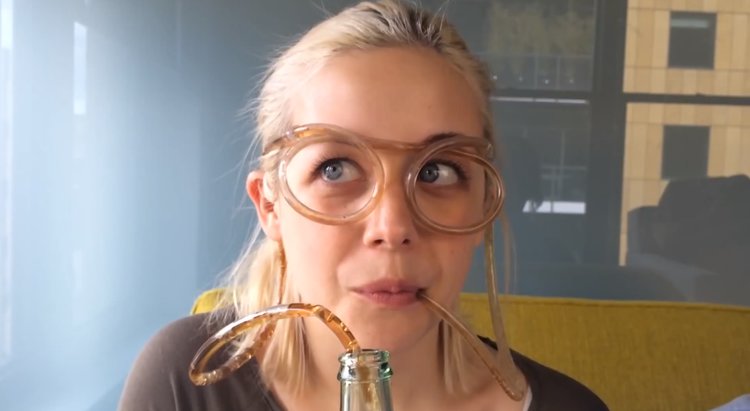 In September, California Governor Jerry Brown signed into law a first-of-its-kind bill aimed at reducing straw waste in the state. Starting in 2019, sit-down restaurants in the Golden State won’t serve any drinks with straws, unless customers ask for them.

Starbucks has vowed to get its iconic green sippers completely off store shelves by 2020, while Seattle banned all plastic utensils, including straws, from bars and businesses city-wide in July.

San Francisco quickly followed suit and passed an ordinance that, once approved, will ban plastic straws beginning in July of 2019, as the San Francisco Chronicle reported. (Several smaller cities, including Malibu and Miami Beach already have their own bans, or prohibit straws on the beach.)

But the truth is that straws are just the tip of the trash heap when it comes to plastic waste.

In 2015, plastic consumption worldwide totaled 300 million metric tonnes. That essentially means that for each one of the world’s 7.6 billion humans, we’re making 88 pounds of plastic a year. The packaging industry is still growing, according to Euromonitor, with flexible plastics leading the pack.

It may seem as though the quarter-of-an-inch diameter drinking straw is the least of our worries. But environmentalists say the fight’s got to start somewhere.

“We look at straws as one of the gateway issues to help people start thinking about the global plastic pollution problem,” Plastic Pollution Coalition CEO Dianna Cohen told Business Insider. “They’ve been designed to be used for a very short amount of time, and then be tossed away.”

Simply put: we have a plastic problem., and it doesn’t end with straws. Cohen is one of many people in the environmental community on a crusade to get people using less plastic.

People in the US now spend more money eating out than eating in— often with food coming in plastic or throw-away containers.

It’s not just food. Most plastic turns to trash after a single use. If you think you’re doing Mother Earth a solid by slinging your used plastics into the recycling, think again. More than 79% of all plastic waste ends up in landfills, or gets stuck in the natural world, regardless of which sorting bin you put it in. Another 12% gets burned up in incinerators, adding to particulate matter to the atmosphere. Only a remaining 9% is actually recycled, according to a 2017 report published in Science Advances.

“It’s wonderful if Starbucks is going to phase out straws, that’s a great start,” Cohen said. But she says it’s clear that the effort can’t end there: “Look at how much other single use plastic is at Starbucks. It’s a joke.”

Other companies aren’t just cutting back on straws. In July, food service giant Aramark, a company that operates in schools, prisons, hospitals, and businesses in 19 countries around the world, vowed to reduce its straw use 60% by 2020, while still making some straws available to people with disabilities who need an assist getting liquids from cup to mouth. The company also says it’ll cut back on plastic cutlery, plastic bags, and “various packaging materials.”

Proposals now under consideration in the UK and throughout Europe are also more wide-ranging. If enacted, they could nix nearly every kind of throw-away plastic in restaurants and businesses across the European continent, from straws to cutlery, cotton swabs, cups, and carry-out containers.

“If we are to protect our oceans from the scourge of plastic, the flow of waste needs to be cut off at the tap,” Greenpeace UK’s political adviser Sam Chetan Welsh said in an emailed statement, when the UK plastic ban proposal was released on Monday. “That means the companies producing and selling all this packaging must take responsibility for it and cut down the amount of plastic ending up in our shopping baskets.”

Every piece of plastic that’s produced in the world started out as the product of a piece of coal, a slick of oil, or natural gas. There were naturally-derived polymers around long before that, including materials like animal horn and rubber, but the kind of plastic that we package things in today didn’t show up until 1907, with the invention of the first synthetic plastic made from fossil fuels: Bakelite.

Because of the way these new, manufactured polymers are heated up and cured, many plastics can’t ever truly be recycled. That robust quality once made them a wonderfully remarkable, nearly unbreakable replacement for older, more fragile products like porcelain or glass. But it also means that “plastic might sit in a landfill, or litter a street, for thousands of years without decomposing,” as the BBC put it.

The plastics that our straws are made from (usually one like polypropelyne) might be recyclable, at least in theory, but most aren’t. They’re dumped into landfills or hauled off on big boats over to China— a plastic trade that’s in decline.

Some straws drift out to sea, becoming just one more piece of the 79 thousand-ton colossal floating iceberg of trash called the Great Pacific Garbage Patch. Scientists who’ve studied the patch, a trash heap wider than two whole Texases that bobs somewhere between Hawaii and California, have discovered it’s essentially a watery pit of litter and illegal dumps that’s trapped in the ocean currents, and it is basically all plastic. A 2018 report based on aerial and water surveys of the patch found that “more than 99.9%” of it is plastic, and it’s not just straws in there. Plastic objects identified in the patch included containers, bottles, lids, bottle caps, packaging straps, ropes, and fishing nets.

So why pick on straws?

The anti-straw movement may have first picked up steam because of a viral video that started going around in 2015. Texas A&M graduate student Christine Figgener happened to be out tagging some sea turtles as part of her research in Costa Rica, when she noticed something encrusted in the nose of one of the male turtles.

“We thought it might be another parasite, or something living on or in him,” Figgener said in a video. The team soon figured out it was actually a “plastic straw stuck in his nose,” and removed it, hoping the extraction might help give him some more breathing time on Earth.

“In a way, that turtle became a poster child,” Cohen, who in addition to heading up the PPC also creates plastic art to raise awareness about the problem, said. “Well, a poster turtle.”

But there’s debate as to whether ditching straws will really lead to more measurable actions. It’s possible that people will feel content that they’ve done their part for Mother Earth, simply by forgoing a single straw, without changing other behaviors. Researchers who’ve studied these questions have come up with mixed results. Sometimes, doing one good thing for the environment can kickstart people into other Earth-friendly behaviors, but other studies suggest that people might give themselves a pass on changing other behaviors once they’ve done one good deed — what’s called a “single action bias.”

It’s time to ditch all kinds of plastic

What it really comes down to is living with less plastic, and changing old behaviors. Other countries are aggressively regulating plastics already. Morocco, once a land laden with fields full of drifting plastic bags, banned the production, sale, and import of plastic bags completely in 2016. Rwanda was one of the first places in the world to ban plastic bags, in 2008, and in the US, both California and Hawaii followed suit, while other states (like Michigan) rose up against the idea of ever weaning themselves off plastics and banned bans. India says all single-use plastic will be banned there by 2022. In England, Queen Elizabeth now insists that no plastic straws or bottles appear on the royal estates.

But there is historical evidence that Americans can change their ways, improving the environment while growing the economy. In the 1960s, unregulated pollution was causing all kinds of problems to crop up across the US, from rivers bursting into flames, to offshore oil spills and asthma-inducing car exhaust. We haven’t gotten rid of any of these things completely, but after the US started the Environmental Protection Agency (EPA) in 1970, we began regulating their use, and the economy grew as the health of the entire country improved.

The EPA has also helped promote the simple “reduce, reuse, recycle” mantra. Cohen hopes people can add one more word into the mix in 2018: “refuse.” As in, refusing plastic containers wherever they’re offered, whether it be at a coffee shop, an ice cream stand, or the grocery store.

Behavioral scientists know this kind of habit change is hard, but as social psychologist John Bargh previously told Business Insider, “the more you practice doing something, the less effort it takes.”

Make reuse a habit, and it becomes a lot easier for your brain to handle. Start carrying around your own containers, Cohen said.

“It’s going to sound like something exciting and new,” Cohen said. “Really, it’s what our parents and our great grandparents did.”

Cohen admits she loves straws, and now has a whole collection of alternative straws at home: paper, bendable steel, rye wheat, and glass.

“Plastics seem inexpensive because all of the cost to the environment and ocean and animals have been externalized,” she said. “The thing about single-use plastic is it’s actually really inconvenient for our health, for the health of the ocean, for the health of wildlife in the ocean, and on land.”

Correction: A previous version of this story misstated how much plastic is produced per human every year. It is 88 pounds.