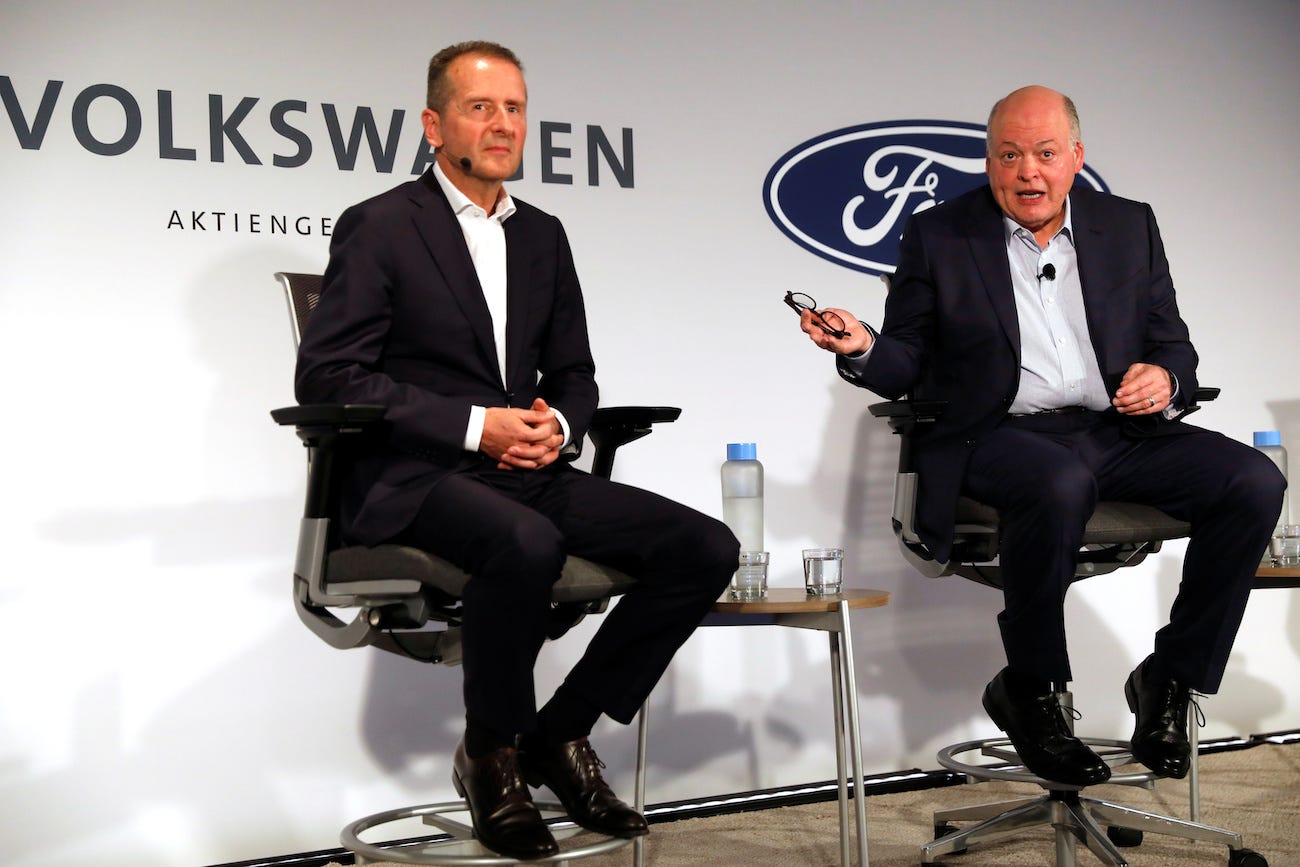 NEW YORK —  Ford and the Volkswagen Group on Friday announced that they would step up their global alliance, first announced in January.

As part of the increased cooperation, Ford will be the first automaker to use VW’s “modular electric toolkit,” or MEB, an electric vehicle platform designed to make the cars cheaper to produce. VW will also invest $2.6 billion in ArgoAI, a self-driving startup in which Ford invested $1 billion in 2017.

VW CEO Herbert Diess and Ford CEO Jim Hackett were on hand to update the media at an event held on Wall Street in lower Manhattan.

“We aim to make the MEB a new standard for our industry and thus turn the electric car from a niche product into a mass phenomenon,” Diess told the analysts, investors, and journalists in attendance. “Opening the MEB drives down production costs, opens up cost savings potential, and allows for electric vehicles at a lower price.”

Volkswagen is the world’s largest automaker, while Ford is No. 2 in the US. VW has been moving aggressively since its Dieselgate scandal to embrace electrification, as electric vehicles are expected to be critically important to its business in Europe and China.

Both companies also will continue to target additional areas where they can work together on electric vehicles – a key strategic priority for both companies as they drive to accelerate the transition to sustainable and affordable mobility.

Ford has been engaged in an $11-billion restructuring since Hackett took over in 2017, maintaining its historically profitable pickup truck leadership while pressing forward on autonomous vehicles and its own electrification strategies.

“While Ford and Volkswagen remain independent and fiercely competitive in the marketplace, teaming up and working with Argo AI on this important technology allows us to deliver unmatched capability, scale and geographic reach,” Hackett said in a statement.

“Unlocking the synergies across a range of areas allows us to showcase the power of our global alliance in this era of smart vehicles for a smart world.”

Shares of Ford rose about 1.3% in early trading Friday following the announcement. VW shares, which trade in Germany, also rose about 1.5%, according to Markets Insider data.

Also on Friday, the VW Group announced a $2.6 billion total investment in ArgoAI, a self-driving-vehicle startup in which Ford in 2017 invested $1 billion. The VW stake brings ArgoAI’s valuation to more than $7 billion.

“We, VW and Ford, will collaborate with Argo on the self-driving system, the SDS,” Hackett said. “That means Ford and VW will be able to reduce what is a large investment for this AV business. We’ll also be able to co-create AV platforms for the future, this helps with downstream manufacturing so you’re not doing a unicorn every time you change brands or models.”

In January, VW and Ford revealed that the first stage of their collaboration would involve commercial vans and pickups.

Prior to Friday’s announcement, there had been speculation in the German press about the direction in which the VW-Ford alliance would move, with some outlets indicating that Ford would gain access to VW’s MEB platform in Europe.

“Thanks to F and VW, our technology could reach nearly every global market, could applied to multiple vehicle brands a variety of vehicle platforms,” ArgoAI CEO Brian Salesky said at the press conference.

When Business Insider inquired last week about the rumors, Ford responded in a statement: “Our talks with Volkswagen continue. Discussions have been productive across a number of areas. We’ll share updates as details become more firm.”

The news had to wait until the VW Group board of directors officially met this week. Ford said that it would deliver 600,000 electric vehicles based on the VW architecture over a six year period; a second European Ford model is also on the drawing board.

“Looking ahead, even more customers and the environment will benefit from Volkswagen’s industry-leading EV architecture,” Diess said in a statement. “Our global alliance is beginning to demonstrate even greater promise, and we are continuing to look at other areas on which we might collaborate.”

Ford and VW’s expanded collaboration comes as the Renault-Nissan-Mitsubishi alliance is embattled, with its former chairman and architect of the partnership, Carlos Ghosn, awaiting trial in Japan on allegations of financial malfeasance.

A proposed merger between Renault and Fiat Chrysler Automobiles that would have created the world’s third-largest automaker, after VW and Toyota, collapsed last month.

Increasingly, global car makers are trying to combine forces to mitigate the high costs of developing new electric and autonomous technologies; compete with new entrants such as Waymo, Uber, Lyft, and Tesla; and seek growth in markets such as China.