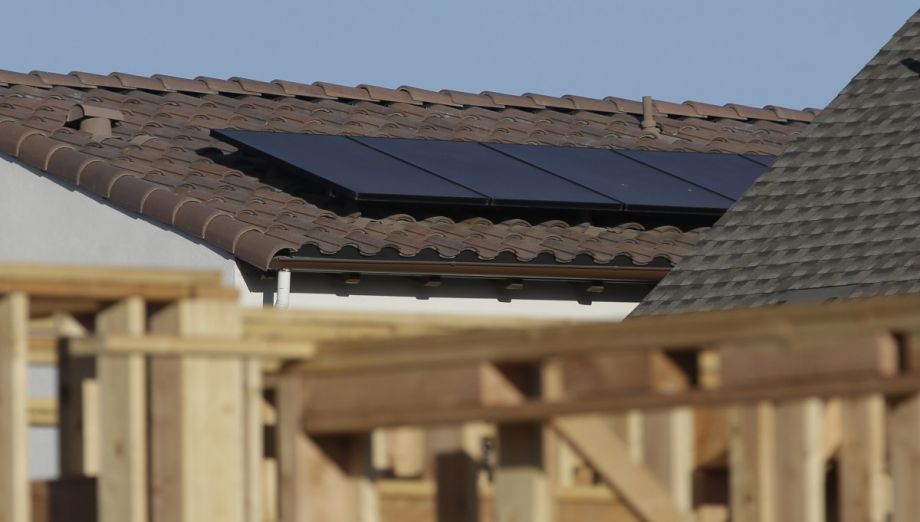 California Will Require Solar Panels on All New Homes

California is officially the first state to require newly built homes to come with enough solar panels to offset their electricity use. The state Building Standards Commission voted unanimously to add the requirement to the state building code last week, the San Jose Mercury News reported.

The new code takes effect in 2020 and covers all single-family homes as well as multifamily buildings up to three stories high. There are exceptions for houses with too-small roofs or those in the shade. An average home is expected to use 53 percent less energy under the new code than one built under the previous standards.

Solar panels can cost up to $10,000 upfront, but are expected to save at least $19,000 in reduced electricity bills over 30 years, the state energy commission executive director Drew Bohan said.

Both environmentalists and industry representatives endorsed the changes, the Mercury News said.

“Six years ago, I was very fearful of this,” Bob Raymer, technical director for the state building association, told the paper. But after a compromise — in that new homes must produce enough power to offset electricity used but not natural gas — the association decided to support the move, he said.

Also supporting were members of the solar industry as well as Tesla, whose Powerwall battery is designed for home solar energy storage.

Of the 113,000 housing units being built in California a year, about 15 percent of them are being built with solar today, Vox reports, so it’s a huge boost to the industry.

Not everyone supported the new rule. Some energy wonks have pointed out that rooftop solar is a very expensive way to reduce carbon emissions; watt for watt, rooftop solar is from 2-6 times more expensive than an industrial-size solar farm, and far more expensive than building more densely near transit, toughening vehicle efficiency standards, or “almost anything else, really,” Vox said. And since California has already agreed to a statewide mandate to reach 50 percent renewable energy by 2030, mandating rooftop solar is just shuffling around what actually gets built, the site said.

On the other hand, if California more than quintuples its solar industry, prices will likely come down — making rooftop solar more attractive in other sunny states. And at the same time, California utilities are about to switch to new pricing schemes that charge customers more for using electricity during peak times, UtilityDive reports. Homeowners who delay, say, running a load of dishes or laundry until off-peak periods — typically late at night — can get significantly cheaper electricity than if they use energy during the peak early evening periods. If electricity is about to get more expensive for those homeowners who will not or cannot shift their energy use, then solar power suddenly looks a lot more attractive.

Further, homeowners aren’t necessarily on the hook for the $10,000 price tag of a new solar install upfront. They can buy the panels outright, but they can also lease them or enter into a power purchase agreement, where they get a lower monthly electricity bill but the bulk of the savings is passed on to the owner of the panels (usually a developer or solar installer).

The move could eventually set policy throughout the country. Anne Hoskins, chief policy officer of Sunrun, the nation’s largest residential solar installation company, told The Verge in May that she doesn’t believe that states would immediately follow suit, “but I think with this example from California, policymakers across the country can see that these new homes can be efficient and cost-effective, so it’s going to be an example that will be used as a model in other states.”